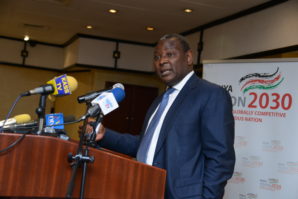 Chairman Vision 2030 Delivery Board (VDB) James Mwangi during the vision 2030 delivery board editors guide meeting on the implementation progress of vision 2030, opportunities and impact of flagship project that was held in Nairobi

Kenya is on the right track to attaining its Vision 2030 goals according to the Vision 2030 Delivery Board (VDB) chairman James Mwangi.

Vision 2030 Delivery Secretariat (VDS) and VDB are working on the second cycle of the MTP to identify successes and challenges in next cycle.

Speaking during a consultative meeting between the Vision 2030 Delivery Board and the Editors Guild, Mwangi said major achieve of the second MTP include the growth in the number of Kenyans that have access to electricity.

In this over 52% of Kenyans have been connected to the national electricity following a reduction in connection fees from KShs35 000 to KShs15 000.

Since the implementation of Vision 2030 in 2008, Kenya has doubled electricity generation, with the installed capacity rising to 2 298 megawatts in 2015 compared to 1200 megawatts in 2008.

Other projects undertaken in the second MTP include Standard Gauge Railway and plans to set up a fertilizer production plant by Toyota Tsusho East Africa.

“The plant will result in affordable fertilizer, which in addition to the Galana-Kulalu irrigation scheme will be game-changers in Kenya’s pursuit to food security,” said Mwangi.

“Over the first two MTPs, the country has set the foundation for the proper take off of other projects across the three Vision 2030 pillars, having largely focused on projects that are enablers,” Mwangi said during a consultative meeting between the Vision 2030 Delivery Board and the Editors Guild.

Gituro Wainaina, Director General Vision 2030 Delivery Secretariat said the vision will lead to attainment of the social- economic and political goals in the next 14 years.

“From the LAPPSET project, roll out of digital literacy programme, setting up of Huduma Centres and construction of new courts, you can clearly see Vision 2030 has been on the ground striving to ensure that Kenya transforms into a newly-industrializing, globally competitive and middle-income country,” Wainaina said.

He stated that the transport sector has significantly improved in terms of infrastructure development in the last five years which show the implementation of Vision 2030 is in progress.

He noted the on-going Lamu Port and South Sudan Ethiopia Transport (LAPSSET) Corridor, railway and pipeline projects between the government of Kenya, Ethiopia and South Sudan evidence that Kenya is angling towards fulfilling major goals of the development blueprint.

The economic front entailing the wholesale and retail trade, tourism, manufacturing and financial services sectors received mixed success. Some projects in these sectors have been implemented successfully while others are significantly behind schedule.

To boost agriculture performance, the Government, in partnership with Toyota Tsusho East Africa as the strategic investor, has commenced the building of three-phased Ksh.103 billion fertilizer plant to be ready in June 2016.

Following the earlier move to identify schools to receive laptops for the Digital Literacy Programme, 150 public primary schools are already acting as a test bed for the full programme implementation.

He noted some of the challenges derailing progress of some projects to be long gestation period for some projects, both in planning and implementation, lack of adequate funds for most projects inadequate financial and performance management systems in counties.

Filed under: Infrastructure, News
Share Tweet Pin G Plus Email
previous article: ODM influence in western Kenya shaken
next article: A Guide for remote DBA experts on How to Secure the Oracle Database