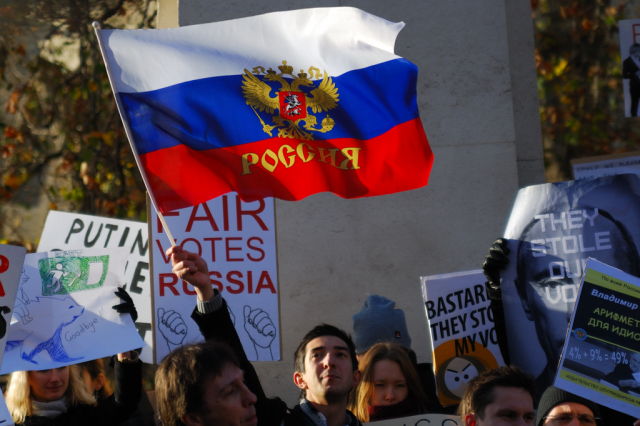 The current Russian premier Vladimir Putin is the overwhelming favourite to beat four attending rivals in a March 4 ballot that should hand him a third term as Kremlin chief. The 59-year-old Putin served as president in 2000-2008 and then as premier for the past four years before deciding to swap jobs with his hand-picked successor Dmitry Medvedev. Later on Medvedev has publicly abandoned to race for the president chair on the upcoming elections and promoted Putin to be the president of the country again.

Putin’s competitors on the elections would be the eccentric leader of LDPR Vladimir Zhirinovsky who is mostly remembered for his provocative public performance, leader of Russian communist party Gennadiy Zyuganov, former head of Russia’s Federation council Sergei Mironov and Russian billionaire Mikhail Prokhorov, who is gaining more support and sympathy from the voters every day.
In attempt to get as much attention prior to the elections as possible Vladimir Putin campaigns with the populist statements on almost every topic Russia’s population has considered sensitive for the last decade. He promised to remove superfluous amount of government cars with special lights which are blocking Moscow’s traffic while taking government officials to their job in a handy and quick way similar to the ambulances taking people to the hospitals in US.
Another populist statement has been made on the topic of mortgage auctions which took place in 90’s, when state property was privatized for a penny and distributed among the inner-circle of the people who we would later refer to as the “oligarchs”. Putin proposed to impose a special “windfall tax”, similar to the one introduced in United Kingdom in the 80’s. This tax would be a one-time payment from the current owners of the assets in the amount which would be calculated as the difference between market cap of the asset and the amount paid during privatization period. The tax would “clean” the assets and businesses from the legacy of unfair assets distribution which took place in the 90’s.
The idea has been heavily criticized by Anatoly Chubais who supervised privatization in 1990’s. He expressed the idea that “there are no legitimate way to resolve this problem in Russia, and that he is more than convinced Putin initiative has a pre-elections temper and after the elections it will be immediately forgotten.”
Michael Prokhorov has also criticized the idea. Prokhorov, who made his money in nickel, aluminum and gold, traveling around Russia making a last-minute bid for the top job. As one of Russia’s richest men, he’s challenging Russia’s most powerful man. And that man, Putin, has acknowledged that the election might go to a second round — though Prokhorov still has an uphill climb if he’s to be a part of it. “The government has to work for the people, not the reverse,” Prokhorov says.
For Prokhorov main task of the participation in the race for Russian presidential chair is mostly the attempt to abduct votes from Zyuganov and Mironov, to dilute Putin’s opposition. In exchange, Russian billionaire and the owner of the New Jersey Nets may gain the right to export his capitals and run a nice sport business, similar to Roman Abramovich.
The reason why Prokhorov is not supporting the “windfall tax” idea is very simple — he also gained from privatization of 90’s and exactly that privatization made him a “billionaire tycoon”. Prokhorov’s Onexim bank has won the mortgage auction of Norilsk Nickel combine what brought him billions of dollars and the position of Norilsk Nickel’s general director later. Later on Prokhorov sold his stake in Norilsk Nickel to another Russian oligarch Oleg Deripaska, so it seems that the later one would have to pay the “windfall tax” if the initiative will surprisingly be brought to life. Deripaska will definitely be very unhappy about such prospective.
Putin’s idea looks very much like impromptu aimed to elicit sympathy among his electorate. It was even criticized by Alfred Kokh, a former deputy prime minister and the inventor of Russian privatization. Elvira Nabiullina was also bewildered by the statement. Although we have to remember that Putin’s statements are never completely meaningless, so maybe the statement about the idea to review results of 1990’s privatization is a kind of reminder for Russian oligarchs about who they have to support on the upcoming elections.
Kremlin strategists have been considering this to be a good pre-elections trick, although in reality it can give completely opposite result. Threatened and exhausted Russian business can concentrate its attention around Michael Prokhorov, though for Prokhorov a “good result” on the elections may become a fatal success and instead of Abramovich’s career he may face a fate similar to Khodorkovsky.
Filed under: Politics, World
Share Tweet Pin G Plus Email
previous article: Gujjars snub self style leader ask community to boycott.
next article: Arab World: RIP Whitney Houston