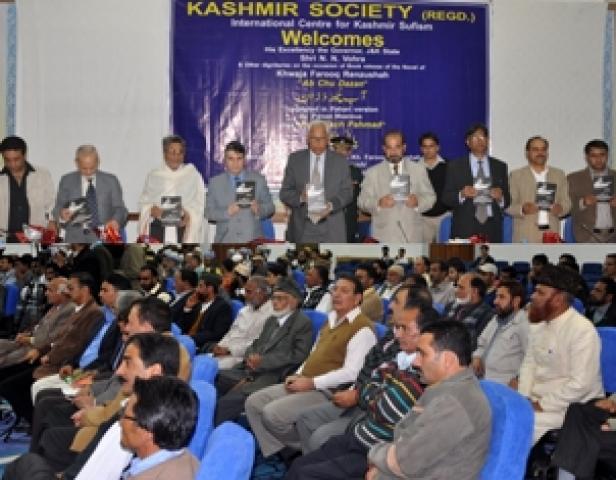 Srinagar, October 17 (Scoop News) – N. N. Vohra, Governor, emphasized the need for greater connectivity in languages and literature so that people speaking one language could benefit from the literary treasures of other languages.

The Governor was addressing after releasing “Pani Bich Pahmad”, the Pahari language version of a Kashmiri novel “Aab Chhu Dazzan”, authored by Khawaja Farooq Renzushah, Director Information, at a function organized by the Kashmir Society at SKICC here this evening. “Pani Bich Pahmad” has been brought out by  Parvez Manoos, a writer, poet and novelist of Urdu and Pahari languages. The Governor also released  Irfan Qureshi’s research book on the literary contributions of Renzushah, “Renzushah Kay Afsaanon Ka Tehqeeqi Mutalah”, on this occasion.  Irfan was conferred as M. Phil degree for this research by . He is the second scholar who has worked on literary contributions of Renzushah. Earlier,  Ian Tak was also conferred M. Phil degree for his research on Rensushah’s novels.

The Governor observed that ours is a very ancient and rich civilization where people of different faiths and cultures have lived in harmony despite many challenges. He said that is a multi-religious, multi-lingual, multi-racial and multi-cultural society where dozens of languages and hundreds of dialects are spoken. He added that this unity in diversity is our real strength and identity which needs to be further strengthened. He observed that a harmonious environment is essential for the promotion of languages and literature, adding that unitedly we can meet all the challenges effectively and forge ahead resolutely on the path of progress and prosperity.

The Governor referred to Khawaja Farooq Renzushah’s literary contributions and congratulated him for Pahari version of his novel being released today. He also complimented  Parvez Manoos for his laudable endeavour and hoped that many other literary works would be translated into Pahari language for the benefit of Pahari speaking people.

The Governor was honoured on this occasion by presenting to him a memento by Syed Mushtaq Ahmad Bukhari, Vice Chairman, Pahari Advisory Board.

G. R. Sufi, State Chief Information Commissioner, stressed that continuous efforts need to be made for the promotion of languages and literature in the State. He highlighted the role of the media in this effort.

Syed Mushtaq Ahmad Bukhari, Vice Chairman, Pahari Advisory Board, thanked the Governor for releasing a book in Pahari language which is spoken by a large number of people. He appreciated the contribution of  Parvez Manoos in the enrichment of Pahari language and literature. He also complimented Khawaja Farooq Renzushah for his achievements in the literary arena.

Prof. Abdul Wahid Qureshi, Vice Chancellor, Central University of Kashmir, said that books are the treasure of knowledge and whenever any addition is made to it this is a welcome step. He added that the central theme of Renzushah’s writings has been the high traditions of Sufism.

Prof. Talat Ahmad, Vice Chancellor, Kashmir University, observed that awarding of M. Phil Degrees to two of the scholars by the Jammu University on pursuing research on the literary works of Khawaja Farooq Renzushah is a significant recognition of his contribution to literature.

Earlier, in his welcome address, Khawaja Farooq Renzushah gave details of his literary pursuits, right from his student days. He said that enhanced inter-connectivity among various languages promotes harmony. He also dwelt on the high traditions of Sufism in Kashmir. He expressed his gratitude to the Governor for his keen interest in the promotion of languages and literature.

Asrar Sultanpuri presented a Vote of Thanks.

A large number of intellectuals, writers, academicians and prominent personalities were present at the book release function. They included Prof. Rehman Rahi and other intellectuals and writers.