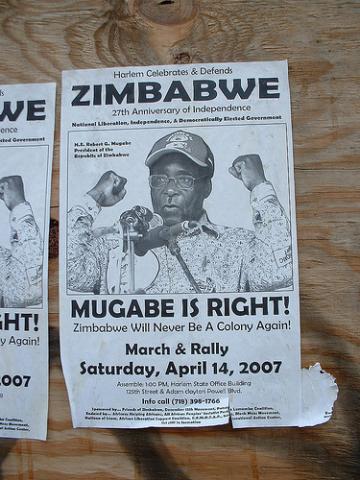 Of voices and votes Zimbabwe style By Busani Bafana, March 29 2008 The world is talking, listening, watching and anticipating. So are more than 13 million Zimbabweans, nearly half of whom registered to vote in the country’s watershed elections today. At 0900 hours GMT, I was one of the 5.9 million Zimbabweans who cast their votes in arguably the most important elections in the 28 years of the country’s history. Important in many respects for families near and far, old and future generations who call the tea pot-shaped 150,804 square miles of land home.

For me, the voting process and opportunity to exercise the universal franchise, represented hope, faith and love – those immortal values. Hope because, unlike past elections, these polls have hogged international spotlight in the same way, 9/11 or Saddam Hussein’s death did.

On the national level, the 2008 elections are a make or break in gauging the maturity of our disputed democracy. Can Zimbabweans shame the world and resolve their differences through the ballot or they are still light years from restoring the glory of that country called Zimbabweans.

For Zimbabwe is beautiful country in many ways. For me, the 2008 elections touched on faith, faith that has sustained each woman, man and child in Zimbabwe who welcomes a new day with a smile. That infectious smile camouflages their pain, their hunger, their sorrow and even their disappointment with how their country has pendulummed from Africa’s bread basket to one of Africa’s begging bowls, from a continental jewel to a pariah state. It was faith that woke me up in the wee hours of the morning to abandon deserved Saturday’s nap to go to the polling station.

I believe my vote remains the sole power all individuals in the world wield in choosing their leaders, their government and deciding how to be governed. This was despite full knowledge that the election process is often fraught with inconsistencies and vulnerable accusations of lacking integrity and transparency.

The world has many examples of failed elections and their aftermath. I could almost touch the faith of each and every one of the people who were in one of the voluntary queues in the cool morning with clear skies.

Each Zimbabwean awaited their turn to speak through those translucent boxes that received white, blue, green and yellow ballot papers – their hopes and their wish lists. It was faith that got them there in the first place. Then love. There was no greater love than that I saw in fellow Zimbabweans who turned up to vote. It was love for their country and for its future.

n reminiscence, I look at the red indelible dye on my left small finger more as a sign of today’s labour of love. After all, red is the colour of passion and love. I was passionate about casting my vote in these elections which have been the talk of town for many months past. No doubt, political analysts, opportunists and shrinks have made predictions about them but we will only know the accuracy of their star gazing when the results are announced.

I was so eager to be on those winding queues – thankfully this time not for bread, sugar or mealie meal – that snaked into more than 9 000 poling stations doted around Zimbabwe. I cleaned the car with such energy and speed you will have thought it was my wedding day.

As I drove to the voting station where I registered in the previous elections, I gave a ride to three citizens. One was a trader, the other and another, a factory worker. I did not ask them where they were headed for the look on their faces and their small talk was an open book. Yet, a middle-aged woman from whom I bought a banana worth Four million-dollars said she did not register to vote. She last voted in the 2000 elections and had given up on participating again because “I did not think my vote meant anything”. I respected her analysis of the power of her vote though I felt giving up is as good as waiting to die. It may not come soon.

The ritual of voting is to me cathartic even though the outcome of this process can go either way. As my father, mother, sisters, brother and sat at the table for brunch each one of us recalled what we had just done. I laughed when my brother said, “I did not know or had never seen some of the faces on those ballot papers but I voted anywhere”.

An honest admission to make any prospective electoral candidate quickly gulp anti-depressants after months of campaigning. I consider Zimbabwe’s 2008 elections the most amazing since Halley’s Comet in 1986. Election posters all decked in colour hugged trees and poles like long lost lovers, some hung on billboards, others were firmly stuck on walls, bus stop signs, gates, lamp posts and some paraded on vehicles.

Zimbabwe’s 2008 harmonised (yet there is a lot of disharmony in the land) elections were the most colourful event since Christmas of the bygone years. Furthermore, they have unlocked and unblocked the creative juices of graphic designers, candidates and supporters alike. If only slogans were the ballot itself, surely freedom and democracy will ring from every dry valley of this country. I stopped staring at them after developing a stiff neck.

What’s more, the candidates had an answer to our every problem from the economy to bread. It seemed all of a sudden they had mastered diagnostic skills for our ills and of course the medicine to cure them. The political debates ranged from serious to mediocre and one thought the US elections where the most topical and exciting since chocolate.

As Zimbabweans at home and abroad glue their eyes and ears to television, to the radio, to e-mails and Short Text Messages for the outcome of the 2008 elections, they will be anticipating a change in the political future of their country. So will be the rest of the world. I am convinced my vote was my voice, need I say more.