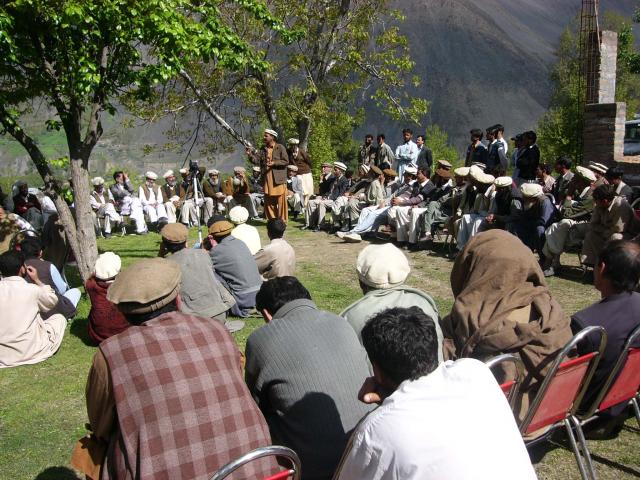 Vote of no confidence against district cabinet in PPPP Workers convention.

CHITRAL: A convention of Pakistan Peoples Party senior workers (pioneers) was held at Jilani house presiding over Gul Nawaz Khaki. Hundred of party workers especially senior members attended the convention. The participants through an unanimous resolution  demanded dissolving of district cabinet of PPP and selecting of interim cabinet. The participants extended the previous resolution in which they had expressed no trust on district cabinet of PPP. The senior workers strongly lamented office bearers of present cabinet who committed treachery as a result defeated PPP candidate in election 2008. Senior workers of PPP who attended the convention from very far flung areas suggested to save the party from division in different groups and to unite all workers and members to strengthen it and to server the nation. They lamented the cabinet members who under a conspiracy recommended name of non popular person for issuing of ticket for national assembly seat who was defeated badly. They stressed upon the workers to detail a delegation and to meet provincial minister Saleem Khan who elected on PPP ticket to play role in joining and uniting the party workers. The speakers strongly condemned some of party workers who separated in previous election and cast their vote in favor of an opposite candidate. Extending the previous resolution of 19th April they felicitated to provincial President Syed Zahir Ali Shah and expressed fully confidence on his leadership. They had criticized Najmuddin Khan for selecting his near and dears one as party leader as a result party was divided in groups and faced great loss. They also announced that a nominate by Najmuddin Khan would be rejected in future. Those who spoke on the occasion were Shahzada Nisar Jilani, Subkhanud Din, M. Hassan, Haji Muhammad, Haji Abdul Rehman, Engineer Temour Shah, H. Haider, Burkhan Shah Advocate, Babu Muhammad, Zahir Shah, Haji Karam Elahi and Gul Nawaz Khaki. A large number of senior workers of PPP attended the convention. They announced that next meeting would be held on 5th May to decide future plan. Gul Hamaad Farooqi Correspondent APP also attended the convention who explain more detail in his report