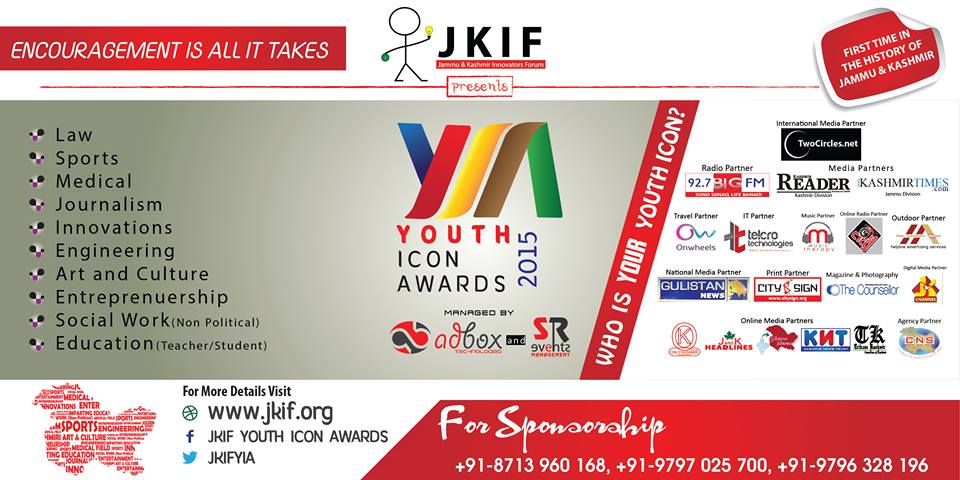 While talking to the press CEO JKIF Er. Mirza Idrees Ul Haq beigh said ” The whole idea behind organizing this event is to identify and felicitate our unsung young heroes in the age group of 18- 30 , whose efforts have had an overwhelming effect on the youth. All nominations have been screened/sought out by our panel expert and We have opened the voting lines for the general public for these uploaded nominations on our websitehttp://yia.jkif.org/ , so that General public can cast their precious votes on their icons uploaded profile. We are receiving a huge response from the general public from last night, the voting counter has hit in thousands and we are expecting more persons from the state to vote till 10: AM, 13th june 2015 .”

“The whole event is a cause based event, as our revenue generated from the ticket sale would be given to a BONE MARROW cancer patient who hails from north Kashmir.

Chief Minister Mufti Mohammad sayeed, some cabinet ministers and Bollywood stars are expected for this event as the guests. The technical part of the event especially the online voting process is being monitored by the valley’s prominent website developer firm, Telcro Technologies Pvt. Ltd. which also have collaborated with the JKIF to support the event.” said Er. idrees