Located in the Mathura district of Uttar Pradesh, Vrindavan is said to be the land where Lord Krishna, the eighth incarnation of Vishnu spent his childhood days. Surrounded by classic architectural splendor, this holy city on the banks of the river Yamuna has over 5000 temples including the famous Banke Behari, Madan Mohan, ISKCON Temple and Prem Mandir. Other important as well as must visit destinations in Vrindavan include Kesi Ghat and Nidhivan. A place of timeless traditions and endless celebrations, Vrindavan boasts of a glorious past, and is an important Hindu pilgrimage site.

Vrindavan is said to be the land where Lord Krishna was brought up by his foster parents Nanda Maharaj and Yashoda. It is in this very land that he along with his elder brother Shri Balarama, performed several leelas or pastimes. There are stories of Krishna’s several pastimes while herding cows with his friends, killing demons like Putana, Bakasur and others, as well as other leelas like showing the entire universe in his mouth to his mother.

It is widely believed that Vrindavan had lost its glory over time until it was rediscovered by Chaitanya Mahaprabhu in the 16th century, when he visited Vrindavan, with the purpose of finding the places associated with Lord Krishna’s enchanting childhood pastimes. Considered a holy place by all traditions of Hinduism, the major tradition followed in Vrindavan is Vaisnavism. Considered the epicenter of Krishna worship, Vrindavan includes places like Govardhana and Gokul that are closely associated with the life and stories of Lord Krishna. 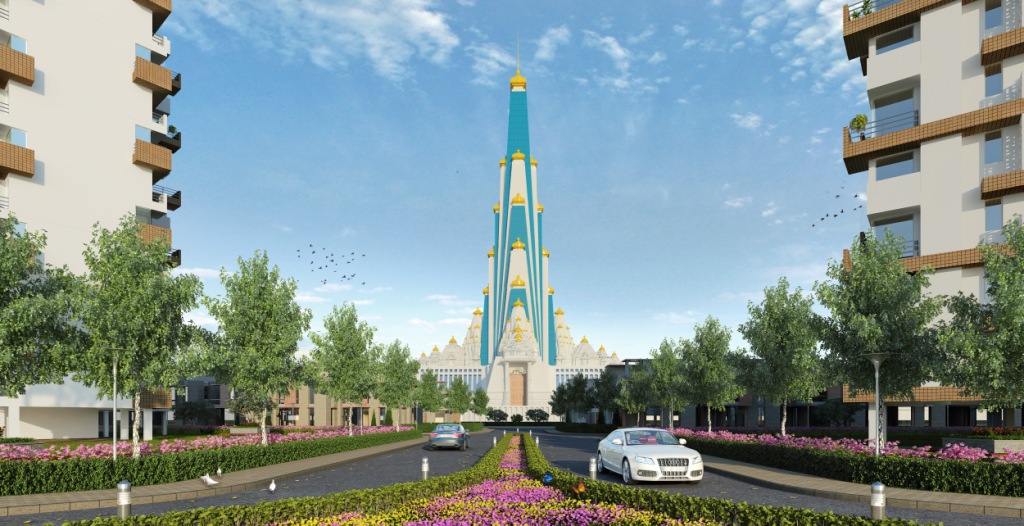 Vrindavan is also going to be the site of the world’s tallest Krishna temple. Called the Vrindavan Chandrodaya Mandir and conceived by the devotees of ISKCON Bangalore, this iconic temple will be a stunning 210 meters (700 feet) tall and with feature multiple temples, Krishna heritage museum and study center, vedic cosmology exhibits and a viewing gallery named Goloka Vrindavan at 210 meters itself. The temple and its surrounding will also feature unique Krishna Lila Theme Parks as well as a magnificent recreation of the 12 principal forests of Vrindavan where Lord Krishna carried out his childhood pastimes.

Today, millions of Hindus visit Vrindavan every year to spend some time in this holy land and immerse themselves in devotion to Lord Krishna. Due to this, Vrindavan over the years have also witnessed significant infrastructure development. Development done by the Government has grown multifold since Vrindavan is now recognized as an important heritage and tourist destination. New roads and bridges, civic amenities, education and medical facilities projects are coming up fast. Public – Private initiatives for restoration of heritage buildings and sites are also in progress. Last but not the least, the booming real estate in this holy city is gradually attracting interest from people worldwide looking for a serene home environment.