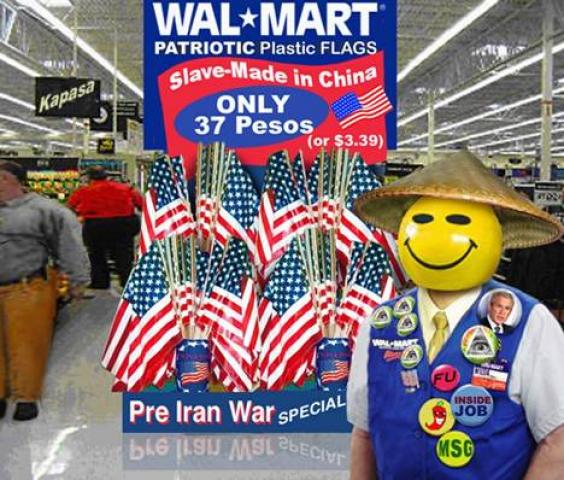 Wal-Mart has been laying low, trying to spruce up its image in recent months. But two recent items show that fancy window dressing can’t hide the mega-giant retailer’s ugly anti-worker underbelly. First, Wal-Mart’s unjust treatment of its female workers. Second, a court decision that pretty much lets Wal-Mart proceed with its eight-year battle to bust a union in Texas.

Pride at Work, an AFL-CIO constituency group, pointed out this great video from a Wal-Mart company party, which pretty much speaks for itself. As the group notes:

Considering that Wal-Mart now faces the largest class-action gender lawsuit in the history of the United States, their little drag show is just not that funny.

The video, taken by a now-disgruntled contractor who has posted it on YouTube with a few clarifications, shows Wal-Mart CEO Lee Scott patting the posterior of a male employee parading around in a dress and wig. Meanwhile:

In 2003, Dr. Richard Drogin, professor emeritus at California State University-Hayward, conducted a study on wages for female employees at Wal-Mart and found that female hourly workers earn up to 37 cents less per hour than their male counterparts and female full-time employees working at least 45 weeks earn on average nearly $5,000 less than male employees in yearly salary.

Here’s the second example of how much Wal-Mart values its employees. Over in Jacksonville, Texas, a handful of meat cutters at Wal-Mart joined a union in 2000. The company then immediately eliminated meat-cutting departments in its stores throughout the nation and said it had no responsibility to recognize the union.

American Rights at Work reports that this week that the D.C. Circuit Court just affirmed a National Labor Relations Board (NLRB) decision and ordered Wal-Mart to negotiate with the workers—but merely over the effects of the company’s decision to eliminate their jobs. There will be no union representation at the store, and the workers won’t get to bargain over wage increases, job security, or better equipment.

Eric Johansson at American Rights at work rights that Joe Hendricks, one of the meat cutters told him the reason he and his co-workers joined a union was to get “a little more respect from Wal-Mart.” As Hendricks put it:

We was more than a number, you know?

But not to Wal-Mart.