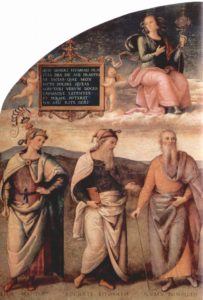 From “Prudence and Justice with Six Antique Wisemen” by Pietro Perugino

People do not seem to realize that their opinion of the world is also a confession of character. ~Ralph Waldo Emerson

We are always paid for our suspicion by finding what we suspect. ~Henry David Thoreau

To find out if she really loved me, I hooked her up to a lie detector. And just as I suspected, my machine was broken. ~Jarod Kintz

A spirit of suspicion is not the gift of discernment. ~R. Alan Woods

If the Tiber rises too high, or the Nile too low, the remedy is always feeding Christians to the lions. ~Tertullian

Shame may restrain what law does not prohibit. ~Lucius Annaeus Seneca

“I make mistakes like the next man. In fact, being–forgive me–rather cleverer than most men, my mistakes tend to be correspondingly huger.” ~J.K. Rowling, Harry Potter and the Half-Blood Prince

It is unwise to be too sure of one’s own wisdom. It is healthy to be reminded that the strongest might weaken and the wisest might err. ~Mahatma Gandhi

Have no fear of perfection – you’ll never reach it. ~Salvador Dalí

I am the wisest man alive, for I know one thing, and that is that I know nothing. ~Plato, The Republic

Once we realize that imperfect understanding is the human condition there is no shame in being wrong, only in failing to correct our mistakes. ~George Soros

When you have faults, do not be afraid to abandon them. ~Confucius

The confession of evil works is the first beginning of good works. ~Saint Augustine

All men make mistakes, but a good man yields when he knows his course is wrong, and repairs the evil. The only crime is pride. ~Sophocles 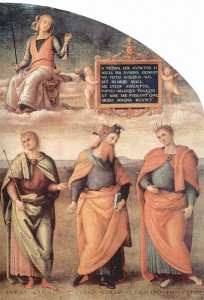 From “Prudence and Justice with Six Antique Wisemen” by Pietro Perugino

And a step backward, after making a wrong turn, is a step in the right direction. ~Kurt Vonnegut

Facing it, always facing it, that’s the way to get through. Face it. ~Joseph Conrad

I sit on a man’s back, choking him and making him carry me, and yet assure myself and others that I am very sorry for him and wish to ease his lot by all possible means – except by getting off his back. ~Leo Tolstoy

To see what is right and not to do it is want of courage. ~Confucius

We made too many wrong mistakes. ~Yogi Berra

Be not ashamed of mistakes and thus make them crimes. ~Confucius

Things refuse to be mismanaged for long. ~Ralph Waldo Emerson

While you’re saving your face, you’re losing your ass. ~Lyndon B. Johnson