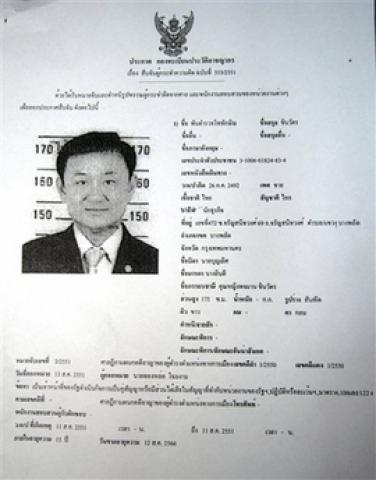 Posters of the former Prime Minister of Thailand Thaksin Sinawatra are circulating the country, but they are not for political campaigns or election purposes.

Instead, these arrest warrants of Mr Thaksin and his wife were put up by police after he fled the country where he faces corruption charges. He and his wife have both been added to Thailand’s most wanted list.

The posters made headlines and frontpage news in the vast majority of Thai papers on Saturday, and are also pasted ubiquitously, at police stations, immigration checkpoints and even toilets.

Nearly 200 members of the current Prime Minister Samak Sundaravej’s own political party, the People’s Power Party, have vehemently criticised the premier for sanctioning the circulation. Most of them are Thaksin followers.

They have prepared a letter, which they will present to Mr Samak, calling the arrest warrant posters "disturbing", and charging that Mr Thaksin should not be treated as a convict.

Meanwhile, the anti-Thaksin People’s Alliance for Democrcy (PAD) announced that they will rally in front of the British Embassy for the repatriation of the couple on Tuesday.

Mr Thaksin has maintained that he and his wife will not receive a fair trial in Thailand. His lawyer, Wichit Plangsrisakul, is also outraged at the distribution of the posters, denouncing it as an attempt to humiliate the pair.

He said: "There is no need to distribute the arrest warrants because Thaksin has issued a statement that he and his family have traveled to England. The police act is inappropriate and may violate the defamation law.”