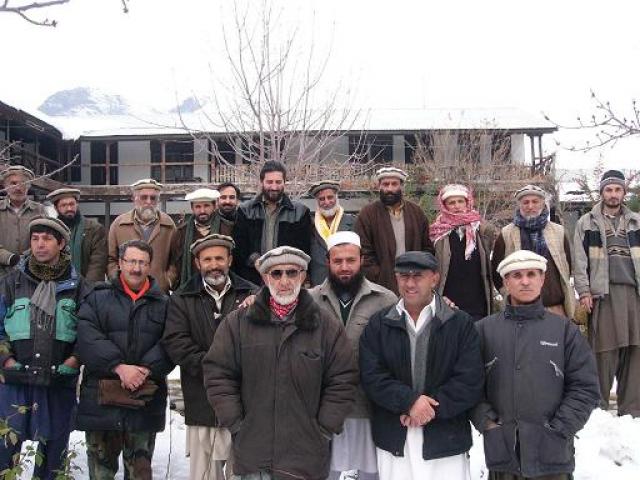 CHITRAL:  Grid Station Operation staff are busy at snow bound Lawari top (having the altitude of 10500 feet from sea level) for restoration of electricity. Due to heavy snowfall on 28 and 29 January some 4 to 6 feet snow recorded at Lawari top as a result main transmission line of 33 KV was badly damaged by breaking of poles and cable. As a result supply of electricity to Chitral was suspended and the whole district plunged into darkness since that. Tehsil Nazim Chitral Sarataj Ahmad Khan visited Ziarat outskirt of Lawari top to analyze the ongoing work of restoration of electricity. It was learned during his visit that some 16 staff of GSO (WAPDA) who working on daily wages basis having no latest equipment, no warm uniform as well as their vehicle is also out of order and not working in hilly and snowbound areas. Sartaj Ahmad Khan shifted cable in his own vehicle to Ziarat and handed over to GSO staff. He also visited border police force posts where border police cob has been deployed for security of Korean staff working in Lawari tunnel as well as to protect the borders. Sartaj Ahmad Khan appreciated and warmly hailed their services who working and performing their duties in 5 feet snow their rooms are fully covered by snow and facing great problems due to cold and chilly weather. Sartaj Ahamd Khan analyzed work of restoration of power to Chitral he was informed by GSO staff that some 3 poles have been damaged at Chitral side by snowfall and they are trying to repair it for restoration of power supply to Chitral. Sartaj Ahmad Khan appraised their services and awarded them cash as recognition their services.

Sartaj Ahmad khan expressed his great concern over the equip less staff of GSO who having no latest equipment for working at snowbound Lawari top. He also alleged that Chairman Wapda has approved a four-wheel vehicle for GSO staff but that is using by Chief executive Pesco. He demanded for regularizing these 16 staff who working on daily wages basis working  for the last 6 years as permanent  and regular staff and also demanded for providing them latest equipment and special allowances working at Lawari top as recognition of their services  who facing great problems in chilly weather at Lawari top.

Sartaj Ahmad Khan also visited ongoing work at road tunnel between Ziarat and Baradam (2 KM long link tunnel) and given cash prize to staff working inside the tunnel during night shift. Later on he visited PTCL exchange at Ashriat and motivated VPTCL staff working at Ashriat for installation of VPTCL and directed them for installing and activating tower at Mori Lasht and Reshun. He also contacted high ups of PTCL and requested them for supplying of some equipments and machineries immediately to Chitral for activating signals of VPTCL towers at Mori Lasht and Reshun.