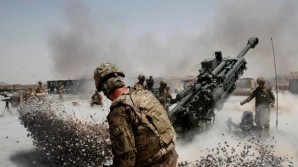 On May 22, 2014 Rep. David Cicilline of Rhode Island asked for and was granted permission to address the United States House of Representatives for one minute regarding the war in Afghanistan:

“Mr. Speaker, after more than a decade of war, the loss of 2,178 American heroes, thousands seriously injured, and the expenditure of nearly $2 trillion, we must end our military presence in Afghanistan now, safely bring our troops home, and begin to focus on the urgent challenges we face here in America.

A sustainable, long-term peace can only be accomplished when the people of Afghanistan assume responsibility for their own security.

Yesterday, our colleague Jim McGovern offered an amendment that directed the President to rapidly accelerate the transition of U.S. combat operations in Afghanistan to the Afghan government by December, and would have required congressional approval if the President sought to keep U.S. military forces in Afghanistan after that. Unfortunately, we were denied the right to have a debate and vote on this amendment.

We owe the brave men and women in uniform a clear plan to bring them home safely and soon and to end this war now.

After more than 12 years of war and the killing of Osama bin Laden, it is time to end the war in Afghanistan and instead focus our attention on creating jobs, rebuilding our infrastructure, providing care for our veterans, and focusing on the serious fiscal challenges facing our Nation”, said Rep. Cicilline (Source: Congressional Record http://thomas.loc.gov/).

Filed under: News, US
Share Tweet Pin G Plus Email
previous article: “Mr. Speaker, I rise today to continue to call for action to address problems we face at VA clinics all across the country’, said Rep. Barrow
next article: Reports about the unethical treatment of our military men and women by the VA is an “affront” said Rep. Fitzpatrick