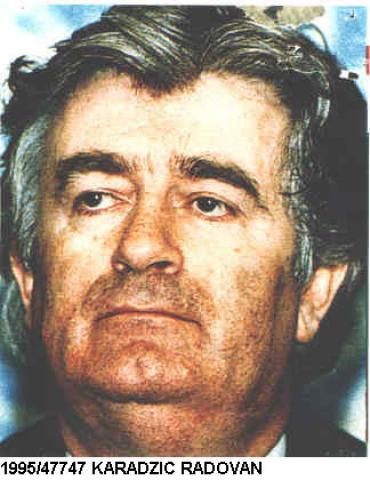 According to reports, former Bosnian Serb leader and one of the world’s most wanted war criminals Radovan KaradÅ¾iÄ‡ has been arrested in Serbia on Monday night.

Below are some of the initial reactions from bloggers.

The arrest of KaradÅ¾iÄ‡ is of course a huge event, leaving just two major suspects (only one of whom is worth the trouble) still to be captured and tried.

The Tribunal had better not mess this one up because there are not many chances left. […]

Pengovsky of Sleeping With Pengovsky:

[…] The arrest was confirmed by the office of the President of Serbia Boris TadiÄ‡, without giving details. I imagine this is a high-risk game for Serbian leadership as KaradÅ¾iÄ‡ and general Ratko MladiÄ‡ (who remains at large) have quite a following in Serbia and Republic of Srbska in Bosnia-Herzegovina. Hopefuly Serbian President Boris TadiÄ‡ will fare better than the late Zoran DjindjiÄ‡.

Perhaprs, just perhaps, the wars of Yugoslavia will finally be brought to an end. […]

[From the comments section, another note by Pengovsky]

After the first couple of hours looking for reactions, caution seems to prevail. Noone wants to get his/her hopes too high too soon.

Douglas Muir of A Fistful of Euros:

[…] On a personal note: for years my wife has said that Karadzic was living “down the street” from us back in the early 2000s. At that time, we were living in the street Golsfortieva (that’s Serbian for “Galsworthy”) in the neighborhood of Vracar in central Belgrade. She picked this up from talking with the neighbors, and for five years it’s been a running joke in our house. “Right down the street from us!” “Right, sure, yes, dear. Whatever, okay.”

Well, at least one source is claiming that the arrest was made in… the neighborhood of Vracar, in central Belgrade. Headline: Blogger’s Wife ‘Very Satisfied’ By Arrest.

Anyway. A day or two may pass without much news, as under Serbian law the accused has the right to challenge certain aspects of his arrest — most notably, whether or not he’s really the person in question.

[…] The world is a better place today than it was yesterday. Those of us interested in international criminal justice sometimes grow weary at the unfairness and impunity that are often the end results of the worst misconduct in the world by some of the worst people in the world.

But not today. Radovan Karadzic now will begin the process that will see him face the charges listed in his indictment of instigating genocide and intentionally killing thousands of Muslims in Bosnia between 1992 and 1995.

[…] I have just returned from Belgrade, and there was indeed hope in the air. Something was changing. It’s easy to say so now, of course, but those who know me personally know that was my feeling. But as I was leaving, Jelena and I were talking about the possibility that Mladic could soon be arrested, but none of us thought that Karadzic would ever be arrested. It is an irony that it took SPS to get to power for this to happen, but it makes sense. They are cynicals, not true believers, and they will over-run any obstacle to their goals. Now Mladic and Karadic were the obstacles… Too bad for them.

At this very moment I am on the phone with one of my friend from Belgrade. She is watching the news on TV and I am waiting for the latest developments. My friends are receiving SMS messages from all around, people are incredibly happy, and now I need to go to sleep because tomorrow there is plenty of work wayting for me, but how can one sleep with such excitement?

[…] Rhetorical question: I wonder how long until the obligatory “free Radovan” website pops up?

No doubt it will contain the good doctor’s poetry. […]

Some Russian bloggers seem to be working on that already.

[…] No matter how much of a war criminal he was in the European Union’s view, he was fighting for his country… The Serbian leadership [is cynical].

In general, it’s an interesting history lesson. Lenin, who killed millions of Russians, is resting by the Kremlin wall and the country is holding military parades next to his mausoleum.

Peter the Great, who turned the peasants into drunkards, drew the country into debt, built a useless port city on human bones – he is a major state figure.

Stalin, who sent tens of millions of Russians to the concentration camps, is the idol of internet dwellers.

President Bush, a war criminal, organizer of torture cells, guilty of using the banned chemical weapons during the storming of Fallujah – he’ll be quietly fishing during his retirement.

None of them spent time in jail, nor has been punished in any way for what they’ve done.

And Radovan KaradÅ¾iÄ‡ will appear in court and they’ll try him… because he was defending his country.

On the other hand, Jesus has also been crucified. […] Screenshot of the Interpol web site. The mugshot on this post is from the same source.