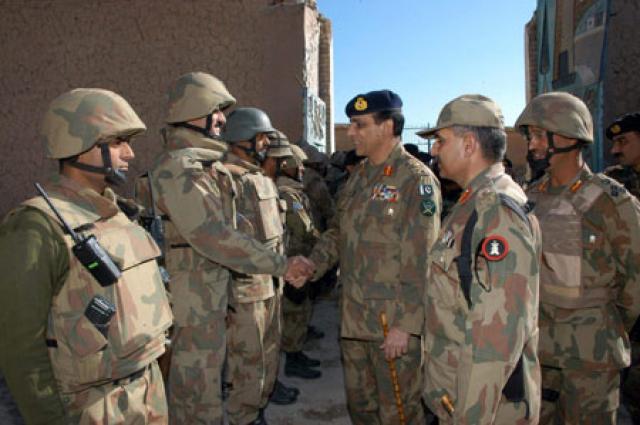 Forces are closing in from 3 sides i.e. from Razmak, Jandola and Wana. Taliban are on the run and forces are forcing them in to designate killing zone for final battle. But what are our dear friends and allies in this War on Terror doing to help us?

Our dear old friend is adding fuel into our miseries. At one side it is providing us some gadgetry to fight extremists so that we remain under its influence, on other doing all to make us suffer for its imperial sins.

For example, our forces cleared Swat and Malakand few months ago. We killed and destroyed TTP swat Strongholds and Leadership and forced the remnants to escape.

Lion Heart was planned following US and Pakistani intelligence reports that the Taliban bases in Mohmand and Bajaur and in Nuristan and Kunar fed into a network that went on to the Taghab Valley in Kapisa province,

There was a Time when advocated that Taliban cannot be destroyed with use of force alone and that due to senseless use of force by US and NATO Taliban movement is changing into Pashtun National struggle. Pakistani government advocated in negotiations with Taliban and through negotiations bringing them near to International community and driving them away from Al Qaida.

At that time American Hawks interpreted as weakness on Part of Pakistan. But now when whole region is in mess has it self changed its strategy.

According to Asia Time on line, US forces have vacated .

The United States has withdrawn its troops from its four key bases in Nuristan, on the border with Pakistan, leaving the northeastern province as a safe haven for the Taliban-led insurgency to orchestrate its regional battles.


According to reports US forces withdrew from the province according to understanding reached by them and Panjpiri Taliban group led by Molvi Zia Rehman. Taliban gave American troops safe passage and protection during this with drawl. He is the same Zia Ur Rehman who gave offer to Molvi Faqir Muhammad TTP deputy Chief to come for refuge few days ago before American with drawl.

In a telephone conversation on Wednesday, a militant linked to Rehman said that now that they had control of Nuristan, the militants are "marching towards Mohmand and Bajor to help their fellow Taliban fighting against Pakistani troops", referring to two tribal agencies across the border.

There are also reports that Militants who escaped from Operation Rah e Rast in Swat and Malakand and those who escaped from Bajor are regrouping under the patronage of Ziaur Rehman in Nuristan . These Regrouped Taliban are Planning to launch offensive during winter when due to snow fall roads will be closed for supply to Pakistani forces.

Its only a promo of  what Americans have done in North , now coming to south , It has been reported in media that immediately after Pakistani Forces started Ground offensive against TTP in South Waziristan, American forces abandoned their posts and withdrew . At a time when we started cleaning the Stronghold of Taliban and Al Qaeda which Americans them selves wanted  us to clean from Past  few years is some thing which no sane mind can understand. It appears they wanted Taliban and Al Qaeda safe route to escape by removing these check posts.

Pakistani Forces have recovered again US, Russian and Indian weapons from . How incompetent Americans are that they cannot control the flow of their weapons and those of its allies to reach terrorists?

There is also a shocking news, the Indian FM Radio channels in Afghan side are propagating worst anti propaganda in Pashtu. Readers can search that Afghan and Indian agencies propagated Pakistani Operations against Taliban as Operations against Pashtuns. At a time when efforts should be to win people against extremists Indians under the WATCH FULL EYES OF US are trying to make things hard.

Americans know what is the effect of their drone attacks amongst the people of . Any sane friend can understand that every drone attack brings more troubles for government. War on terror as I understand is war of Minds. US is helping us to lose this war of minds by aiding terrorists indirectly.

The only Problem in is US of A. it’s their presence and their conceit attitude towards native Population which has destabilized the whole region. They backed War and Drug lords which brought ordinary Afghan near to extremists, for killing one militant they killed dozen innocents. They forced Pashtuns into extremism. Now when things are getting out of hands they want negotiation. They want to drive Afghans into ethnic civil war. The runoff between Abdullah Abdullah and Hamid Karzai and backing to Abdullah Abdullah is one step forward to destroy remaining unity in Afghan society.

All things are going as planned. In Iraq Civil War helped removing pressure from American forces because Iraqis started fighting each other. Same is coming to . According to Reports Price of AK 47 has reached $600 in Tajik areas due to rise in demand.  Abdullah Abdullah Faction is fully prepared to start new Pashtun genocide. Tajik will kill Pashtun and vice versa , divide and rule policy will again prove to be best for imperials to control.