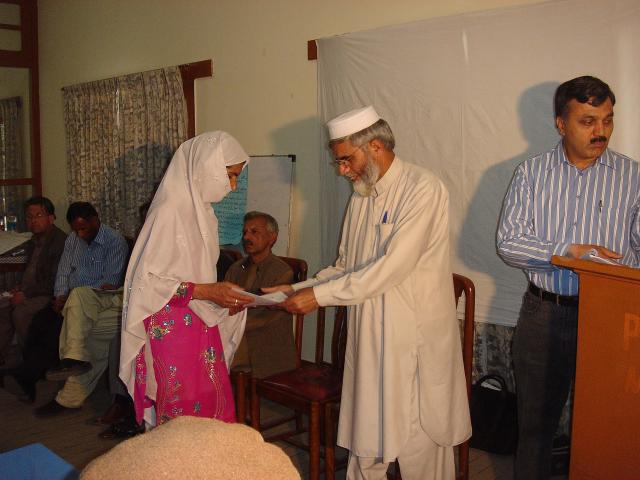 CHITRAL: Agha Khan Planning and Building Services, Pakistan arranged a two days training of various community members on the subject of water and sanitation in a local  Hotel of Chitral. It was held under  Water and Sanitation Extention Program (WASEP)  Kredietwstalt for Wadrafbaw (KFW) program funded by the Government of Germany through their development bank KFW.
Aim of the event was to provide training to the water and sanitation committee members, implementers and operators regarding their responsibilities in the implementation of the schemes under execution in their villages by WASEP-KFW program. They were also briefed about the social organization, engineering, health & hygiene and water quality components of the project.
Twenty seven community members participated in this training workshop.
At the end of second day, a concluding ceremony was held to distribute certificates among the participants including women fold representing women organizations of the area  Other than the participants, Public Health Department Engineers, President Regional Council and Station Director Radio Pakistan Chitral also were present on the occasion.
Regional Coordinator WASEP-KFW program in Chitral, Maqbool Hussain thanked the guests and participants for their presence in the training and the function. He presented an overview of the WASEP activities in Pakistan and details of the KFW program. He also offered WASEP’s assistance to NGOs and government organizations.
President of the Regional Council, and head of Professional Development Center of Aga Khan University Dr. Mir Afzal Tajik particularly emphasized upon participation of communities in such programs and urged the participants to motivate their fellows on the same pattern.
Engineer Zahirullah of Public Health Department showed commitment to work with AKPBSP in solving the people’s problems related to the water and sanitation facilities.
At the culmination of the ceremony, Raja Safdar Khan Social Coordinator of WASEP-KFW program offered the closing remarks and certificates were given away to the participants by honorable guests. The speaker highly hailed this workshop regarding sensitization about potable drinking water and sanitation system. They said that your wash room and kitchen must be well sophisticated and hygienically clean so as to save you from infectious diseases because 70% diseases are spreading due to contaminated water. They also criticized some plan that 75% of developmental schemes were failed due to non ownership and no participation of the local community. A large number of people belonging to several relevant organizations including women folk attended this workshop and demanded for continuation and expanding its tenure for sustainable development.
G.H. Farooqi PO Box No.50 GPO Chitral Pakistan
Phone No.03025989602, 03337069572, 03469002167, 03159698446, 0943302295 , 316052, 414418
Email: gulhamad@gmail.com
Filed under: Business, World
Share Tweet Pin G Plus Email
previous article: BJP committed to fight for eradiction of corruption
next article: In China, The Rich Are Fleeing