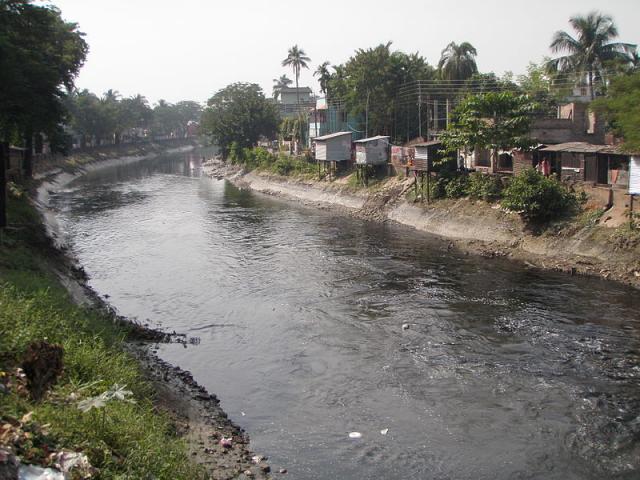 The problem of water in the world is known to all, but underestimated, because only its visible side is taken into account : how much water is at hand, and how much of it is drunk by people.
Water can be abundant but, if it is contaminated by human, farming or industrial activities, it becomes useless. In addition, a great majority of the water in the world isn’t drunk by humans, it is consumed by industry, cattle and farming. As a consequence, wastewater management is paramount, in the sense that it sets surrounding populations on the course of survival, perdition or prosperity.
French Guyana sets a sad but telling example of poor wastewater treatment on water. The amazonian area is richly irrigated by rivers among the largest in the world and a humidity rate nearing 100% in all of its surface. In spite of the large surface, illegal gold washing activities wreak havoc on the ecosystem. If the French government deploys so much energy to contain the business, it isn’t only to keep the mineral, which belongs to France, from being stolen and smuggled out by Brazilian or Surinamese gold-diggers. It is also because makeshift gold washing techniques operate by concentrating gold with mercury, which is then filtered off the gold by evaporation. Quicksilver droplets then fall onto the foliage and get washed down into the rivers. So, everything downhill from the gold-washing site is severely polluted by the activity.This example of gold-washing may be extreme and illegal, but standard industrial sites can produce comparable effects by releasing sulfure- or nitrate-laden waters back into the environment, once they have been used in the plant’s processes.
Therefore, water management companies have to develop innovating technologies wich allow water quality to be maintained downstream from industrial sites.The first technology to allow water to regenerate is century-old and known all around the world : simple setting. Also called primary treatment, water is let to rest in large basins, so that polluting particles in supension can slowly set to the bottom, through gravity. This process does not, however, cleanse water thoroughly enough for it to be returned to nature, as only 60% of polluting elements will be extracted. Additional techniques must be used to move on to the secondary phase of treatment.
In secondary treatment, there is an array of techniques, owned by various companies. They range from rather simple to quite complex. Companies have specialized in natural treatment of wastewater. Water is filtered through the earth, which keeps holds and "digests" a variety of elements held in the water, with the exception of nitrates and chlorides, which are a threat to water levels in which they then trickle into. Bushes and trees (notably willows, particularly apt to retain these substances) are planted into the ground to complete the cleansing process. Their roots absorb and feed on the pollution particles, using them to grow.
A whole array of techniques, also widespread, can be added to this process. Agro Environment specializes in flocculation, or coagulation, which is a process which relies on the adding of a chemical substance to the water which causes polluting particles to group together and surface, thus making the mix easy to extract from the water. Another process is double nitrification/denitrification which will extract ammonium from water, so as to preserve the environment. These processes, combined, bring wastewater cleansing to an advanced level and will suffice for most industrial sites.
Finally, in certain cases, a third level of processing can be necessary before returning water to its natural environment. When the water is either very saturated or charged with very toxic particles, or when the environment is particularly vulnerable to pollution, this last process is necessary. For example, Veolia Water has already deployed these solutions in extreme environments. The first step of that process is the injection of bacteria which will "eat" the pollution particles. Once the bacteria have absorbed the particles, they are "burned" by ultra-violet light.The water is run through pipes and exposed to submerged lamps which will finish purifying the water, before it is released to its natural habitat.
In certain low-level industries in developing countries, wastewater treatment is one of the main hampers to overall economic development. Indian leather-shops are notorious for the havoc they wreak onto the environment and neighboring cultures. 35 liters of water are used to process 1 kilogram of leather. Through the various steps of leather processing, the water is mixed with almost 200 different chemicals, such as pigments, chrome and nitrates. Less than one quarter of these workshops treat their wastewater before releasing it back into nature, with dreadful consequences onto surrounding agriculture, public health and water levels. Breakthroughs and broadcasting of these water treatment technologies will drive economic prosperity, both in developing and in developed countries. India and Veolia Water, the largest water engineering firm in the world, illustrate that fact perfectly : India has sustained a bold development rate these past decades, upheld by development urban champions, such as Chennai, Jamshedpur, or Nagpur. All cities where Veolia Water has been spreading its technology.
Filed under: Health & Science
Share Tweet Pin G Plus Email
previous article: Mughal Road Motor Rally from June 27
next article: Panthers condemn all forms of terrorism