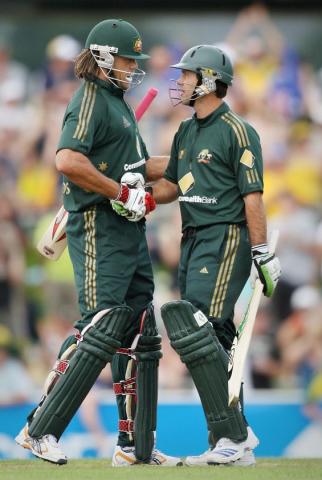 Ponting said he was happy to have Symonds back in the team and compared him with the legendary Wicket keeper Adam Gilchrist. "He’s like Gilly (Adam Gilchrist) if he gets in and gets going a Test match can change very, very quickly. You almost need that sort of player in that one to six role, he’s good at batting with the tail, you know he can clear the fence in that situation and keep the scoreboard ticking over," said Ponting.

"It is the same with a lot of those really talented players, Michael Clarke is a good example of that, his average is probably low 40s at state level and mid 40s, 45 at Test level," said Ponting.

"There’s not many bowlers want to see him 22 yards away when he’s going." he finished.

Steve waugh said the Australians should not drop Watson to accomodate Symonds.

"It’s a difficult choice. But Watson did very well (in India) and he might come in as a third quick. I think Australia would like to have both those players in the team if they can," said Waugh.

"We don’t want to expect miracles straight away in Brisbane, I think it will take him a couple of games to get back into it," he said.