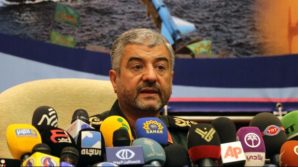 “We are ready to support the Palestinian resistance in different dimensions,” General Jafari told reporters in Tehran on Monday.

Fars news is reporting that the Commander of the Islamic Revolution Guards Corps (IRGC) Major General Mohammad Ali Jafari has underlined his forces’ readiness to support Palestinian resistance groups in their fight against the Israeli regime.

“We are ready to support the Palestinian resistance in different dimensions,” Jafari told reporters in Tehran on Monday.

What exactly that means is unclear.

Meantime, he praised the resistance shown by the Palestinian groups, and said, “The Gaza war displayed that the power of the Resistance (front) has no end and has been institutionalized.”

“This power is growing; massive launch of missiles, defusing and repelling the enemy’s ground offensive and upgrading the Palestinians’ threshold of tolerance all testify to this increased power ( of the Palestinian resistance groups),” the IRGC top general said.

Iran has on many occasions “helped” the Palestinian nation in its fight against the Israeli occupation of their lands, the report noted. Although it did not spell out how?

See related report: General Ramezan Sharif all but admits Iranian military involvement in the war in Gaza between Hamas and Israel https://groundreport.com/brigadier-general-farzad-esmayeeli-all-but-admits-iranian-military-involvement-in-the-war-in-gaza-between-hamas-and-israel/

It should be noted that General Jafari is an expert on  asymmetrical warfare strategies.  In fact General Jafari reportedly developed many of  ideas and experiences on unconventional, or “asymmetrical” warfare.  He is describe by people who know him as an absolute genius in his approach to war.

His work on asymmetrical warfare strategies include the use of Iranian terrain in “mobile-defensive operations” and rely on lessons and experiences learned mainly in the Iran–Iraq War.

General Jafari said in Tehran on September 3, 2007, given “the enemy’s” numerical or technological superiority, the IRGC would use asymmetrical warfare capabilities such as those used by Hezbollah in its 2006 conflict with Israel in Lebanon.

General Jafari is a careful student of US war strategies and studies very closely our military’s weaknesses.

He was once quoted as saying: “Iranian strategy in any future conflict (with the United States) would also reflect the strengths and weaknesses of U.S. forces in Afghanistan and Iraq.”