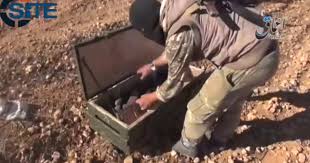 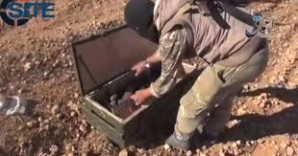 US airdrop of munitions falls into ISIS hands in Kobani.

During a press briefing at the Pentagon on October 21, 2104 Rear Admiral Kirby was asked about a pallet drop of weapons and supplies (28 in total) one of which was confirmed to have  went astray and was discovered by ISIS (Islamic State of Iraq and Syria) scouts in Kobani.

“Q: On Kobani, as well, there was a video that was released earlier today on YouTube that showed — seemed to show some ISIS fighters and they — with one of these bundles. Have you been able to in any way verify, has the U.S. military verified that? Was that the one that went astray and then was later blown up? Do you have any details?

REAR ADM. KIRBY: The short answer is, Courtney, we don’t know. The analysts in Tampa and here in the Pentagon are examining that video right now, as a matter of fact, and we’re still — we’re still taking a look at it and assessing the validity of it. So I honestly don’t know if that was one of the ones dropped and whether it is, in fact, or the contents of it are, in fact, in the hands of ISIL. We just — we don’t know. We’re still looking at it.

Q: Can you even say whether — like, it shows some mortars, some grenades, like some RPG parts. Were those the kinds of things that were even dropped?

REAR ADM. KIRBY: They are — they are certainly of the — of the kinds of material that was dropped, was small-arms ammunition and weaponry. So it’s not out of the realm of the possible in that regard. But, again, we’re taking a look at this, and, you know, we just don’t know. And when we have something definitive that we can provide in terms of an assessment on that, we’ll do that.

I do want to add, though, that we are very confident that the vast majority of the bundles did end up in the right hands. In fact, we’re only aware of one bundle that did not. Again, we’ll — if we can confirm that this one is or isn’t, we’ll certainly do that and let you know.”

“Q: Admiral Kirby, yesterday, officials were saying that they believe that this one air drop that went astray had actually been destroyed by CENTCOM. Is there now a possibility that it wasn’t actually destroyed? Is this the same bundle that is potentially in the hands of ISIL now?

REAR ADM. KIRBY: Well, as I said to Courtney, we’re aware that one bundle did not make it into the right hands. And you saw the CENTCOM release indicating that they destroyed it from the air. That doesn’t — all of that doesn’t take away from the notion that this video is out there and that it could, in fact, be that bundle. We just don’t know.

So you’ve got to give us a little bit of time. The video just popped. I can tell you that analysts are working as fast as they can to try to validate it. And when we have something that we can give you, we’ll provide it. Just don’t know right now.

Q: Follow-up on that, please? Do you know how much time lapsed from the time that pallet was dropped to when it was destroyed?

Q: (inaudible) — take for the record and get back to us on?

REAR ADM. KIRBY: I’ll do my best. I don’t know. As I said, we’re watching — we’re looking at the video. We’re doing our best to try to validate it. And I’m not going to get ahead of that process.

Q: But is it something that you would presumably destroy right away? Is — and then how soon did you discover pallets got into the wrong hands —

Again, it’s just now popped online. We don’t even know if it’s authentic, so you’ve just got to give us a little time to take a look at it.

Q: Quick clarification. Is it possible that more than one bundle went astray? I mean, it’s possible that you destroyed one, but another one went off-course and ISIL captured it?

REAR ADM. KIRBY: I can only go as far as I’ve gone earlier, which is to say that we believe that there was only one that went astray. That’s the indication that we have now and what we’ve been talking to since the — since the air drop. So, again, we’ll — we’ll take a look at this, and when we have something for you, we’ll let you know.”