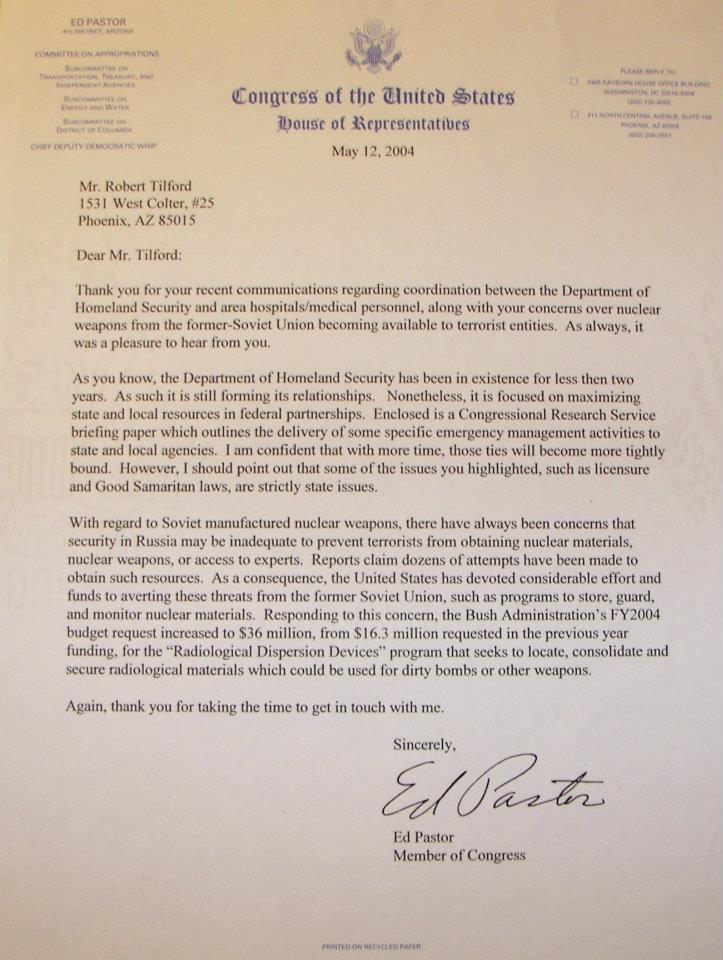 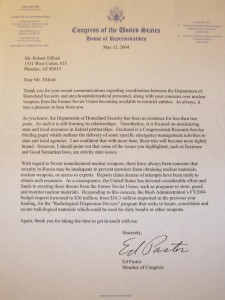 Letter from Congressman Ed Pastor of Arizona to Robert Tilford regarding missing suitcase nukes from the former Soviet Union, dated May 12, 2004.

We live in a very dangerous world! Having served in the United States Army during the end of the Cold War in the mid 1980’s, as an infantryman with the 82nd Airborne Division at Ft. Bragg, N.C. I can personally attest to that fact.

To help underscore that point on January 25, 1995 then Russian President Boris Yeltsin came within minutes of initiating a full scale nuclear strike on the United States because of a unidentified Norwegian scientific rocket.

In another, not so publicized incident during the Cuban Missile Crisis, the USS Beale had depth charged an unidentified submarine that was, in fact Soviet and armed to the teeth with multiple nuclear weapons – the Soviet commanders at the time argued over whether or not to retaliate with a nuclear tipped torpedo. I guess you could say that everyone alive today is thankful they didn’t do that!

Such incidents remind us that nuclear war can happen anytime.

It’s why such things as nuclear disarmament and peace between nations is so important today.

It’s also why I pray to God everyday that tensions between the United States and Russia in particular don’t escalate into an all out nuclear war over the situation happening right now in Ukraine.

See article: How to survive a nuclear bomb attack! https://groundreport.com/how-to-survive-a-nuclear-bomb-attack/