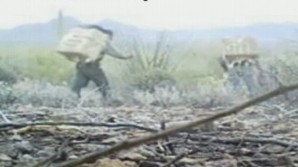 Illegal alien “mules” observed sneaking into the United States from Mexico up through the Arizona border near Tucson. Each man is carrying what is suspected of being a backpack full of compressed marijuana in 2014.

Sen. Rand Paul today issued the following statement in response to President Obama’s decision to implement immigration reform through the use of executive action.

“President Obama is not above the law and has no right to issue Executive Amnesty. His actions blatantly ignore the Separations of Powers and the principles our country was founded on. The President has said 22 times previously that he does not have the power to legislate on immigration,” Sen. Paul said. “I believe that immigration reform is needed, however for true and effective reform, we must first secure the border. I will not sit idly by and let the President bypass Congress and our Constitution.”

A clip of the interview can be found HERE .

See also: America’s Unsecure Border: Congressman John Carter (R-TX) and Rob Bishop (R-UT) discuss the lawlessness on the southern border that has been ignored by the Obama Administration http://www.youtube.com/watch?v=DDUq36wk7go

Note: Rand Paul is the junior United States Senator from Kentucky. In the Senate Rand Paul served on the Foreign Relations, Health, Education, Labor and Pensions, Homeland Security and Government Affairs and Small Business Committee. Senator Paul is arguably one of the most influential senators in Washington D.C.