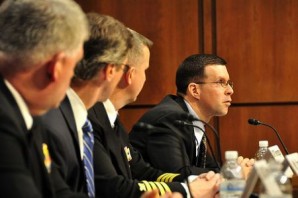 Members of the military testify to waste, fraud and abuse of taxpayer funds in Congressional hearings. So far hundreds of billions of dollars have been wasted or spent on lost causes in Afghanistan.

On February 11, 2014 Rep. Jones of North Carolina asked for and was granted permission to address the United States House of Representatives for 3 minutes regarding the war in Afghanistan.

What follows is a unedited version of his speech, which has been all but ignored by the mainstream media:

“Mr. Speaker, I am on the House floor today to share with my colleagues several recent headlines from our national papers.

After billions in U.S. investment, Afghanistan roads are falling apart.

This article goes on to describe the Afghan road network, built with U.S. tax dollars, as a “$4 billion project that was once a symbol of promise in post-Taliban Afghanistan but is now falling apart.”

Another headline from January 30 from The New York Times:

U.S. aid to Afghanistan flows on despite warnings of misuse.

This report informs us that two global firms hired by the United States 3 years ago have found that none of the 16 Afghan ministries can be counted on to keep American aid from being stolen or wasted.

Most recently, this week Reuters published an article titled, “U.S. aid plan seeks to shield Afghanistan from end to war economy,” which details a new initiative from the U.S. Agency for International Development that would spend almost $300 million to prop up the Afghan economy.

Mr. Speaker, the common factor in these articles is that each describes in alarming detail the absolute waste of American tax dollars overseas. How can we in good conscience tell the American people we are going to continue to send their money to Afghanistan for 10 more years under the Bilateral Strategic Agreement that the United States is currently negotiating with President Karzai?

I hope President Karzai will not sign the agreement. It would be the best thing to happen to the American taxpayer.

Ironically, today or tomorrow we are going to raise the debt ceiling. This is after already raising it by $230 billion in October of 2013, with $30 billion reserved for Afghanistan. This is not right or fair to the American people.

We need to stop the insanity in Afghanistan, which could be done if the leaders of the House and Senate would allow Members of both parties to bring bills related to this issue to the floor for a vote.

In addition to the money we are spending, how many more American lives must be lost overseas before Congress decides to act? We cannot continue to waste American money and precious lives in this manner. It is time to end the abuse of the American resources in Afghanistan.

See related article: Money Pit: The Monstrous Failure of US Aid to Afghanistanhttp://www.worldaffairsjournal.org/article/money-pit-monstrous-failure-us-aid-afghanistan