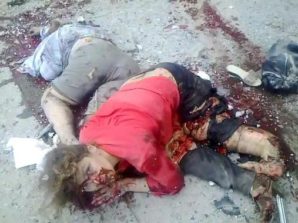 A woman is literally blown apart by a artillery shell in Lugansk, fired by the Ukrainian Army (2014) into a civilian enclave near the Russian border with Ukraine. She died a short time later…

Vladimir Putin chaired a meeting of the Presidential Council for Civil Society and Human Rights at the Kremlin on October 14, 2014. There he condemned what he called the double standard in the assessment of crimes against the civilian population of southeastern Ukraine.

I am happy to welcome you to our traditional meeting, which is taking place on the eve of the Council’s tenth anniversary.

I would like to begin by saying that in these years the Council has truly become an important instrument for protecting human rights in Russia. It has a very broad range of responsibilities: from performing a general analysis of the situation with human rights in the country and making recommendations to the head of state to providing assistance in specific cases when citizens need protection.

All human rights and freedoms are of supreme value, and this is stated clearly in our Constitution. Represented on our Council are many influential organisations, whose members are authoritative experts on human rights and political freedoms. I would like to begin this meeting be saying that I find it very important that the Council members and their organisations manage to find such a balance between their various activities, between political freedoms, voting rights and social issues.

At the previous Council meetings last year and this year we considered ways to ensure people’s rights to accessible housing, healthcare, the support of young families and orphaned children, issues of domestic violence, the reform of the penitentiary system and so forth.

I am certain that we need to continue this well-balanced work in the future. Unfortunately for the state, it sometimes happens that in the final count a citizen can only rely on people who are doing this work out of idealism and have no ties whatsoever to any official organisations.

The state will continue its support of civil society institutions, it will help them to implement their socially and politically important projects, including by providing funding. In 2013, 2.7 billion rubles [over $66 million] were allocated for this purpose from the federal budget, while the plan for next year is about 4.7 billion rubles.

We are witnessing the application of double standards in the assessment of crimes against the civilian population of southeastern Ukraine, violations of the fundamental human rights to life and personal integrity. People are subjected to torture, to cruel and humiliating punishment, discrimination and illegal rulings.

Unfortunately, many international human rights organisations close their eyes to what is going on there, hypocritically turning away. Meanwhile, look at what is happening now, in the course of the election campaign – and this has to do with voting rights – do we not see it? Those in disagreement are beaten up and humiliated all the time. What kind of democracy is it that is being imposed on this territory?

I know that Council members here have assumed an honest position on this matter; they travelled to the sites and helped those who found themselves in a crisis, sometimes at an impasse. I would like to thank you for this and say that we will support this activity. However, I would like to call on you to be careful – I am referring here to your personal safety as well. This is something I would like to talk about today and to hear your assessments of.

This is all I wanted to say as an opening.

VLADIMIR PUTIN: I would like to briefly respond to what was said here, and then we can have an exchange on these or other issues.

Let us begin with the most pressing, most widely discussed issue – the developments in Ukraine. I fully agree that we need to demilitarise public awareness. However, primarily, I would like to draw your attention to the fact that the authorities are not doing this on purpose: first, they are not consciously demilitarising awareness; second, this is very hard to do unilaterally. This takes some goodwill on both sides.

You know, the media has shown over the past few days – today and yesterday – they are celebrating OUN-UIA, this nationalistic, pro-fascist organisation; it is practically an official celebration in Ukraine accompanied by calls for reprisals against representatives of the Russian Orthodox Church of the Moscow Patriarchy. All this while the Patriarch is doing everything to stop the fratricidal conflict. The Patriarch himself and other Church Primates are doing so much and are being attacked: 18 churches have already been taken away and believers are chased out of churches.

Where are the human rights activists regarding the right to religious worship and freedom of religion? There is almost total silence here, by the way. Not a word, as if nothing is happening, while this is very serious. People are being chased out of churches, beaten up and humiliated and their property is taken away. Therefore, this needs to be done. We should move in this direction because, first of all, one cannot look at what is going on there without tears, and second, the greatest tragedy is unfolding in front of our very eyes.

The greatest tragedy here is the alienation of the Russian and Ukrainian peoples. This is the worst thing. Regardless of all the issues we are facing today, we need to find ways to overcome this. However, I would like to repeat that this has to be done jointly with the Ukrainian authorities. This is the first thing I wanted to draw you attention to.

Regarding the questions that were raised here. Of course, we must and we will help the children and adults who have found themselves in a difficult situation. You know this is not easy. You saw with your own eyes how when we brought some of the children whom we could only help here, we were immediately accused of kidnapping them. These accusations were made several times. I believe some of the children were returned after they got help. If a person does not want to return, we cannot force them and will not do it.

The same goes for medications and food that people in the southeast of Ukraine need so much. You have also seen this for yourselves. We simply could not reach agreement with them on humanitarian convoys to the area. They found all sorts of excuses not to let us in. I will not go into the details of these negotiations. However, we were forced to simply send out the convoys on our own. We let the Ukrainian border guards and customs officers cross over to our territory to inspect the cargo, and they just sat there. They did not inspect the goods. So why were they sitting there?

The Red Cross worked on and off, because they have specific regulations for situations when a country where they propose to perform certain actions does not take part, they don’t not take part either. What are we to do? Where are the medications and food? Should we simply let people die there?

These are all very complicated issues having to do with various aspects, both legal and humanitarian. I am certain that in this case the humanitarian aspect is more important. We cannot sit and watch people die of hunger and cold, as you said here, or without medications and medical aid. Meanwhile I’ve heard complaints about this from our Ukrainian colleagues, as well as from the Europeans and Americans. This is strange, but it is a fact. It is simply incredible, but it is a fact. Nevertheless, we will continue to work patiently with everyone to resolve all these issues, but we should resolve them by agreeing on joint efforts rather than through confrontation.

Now regarding those who would like to obtain refugee status. We will of course work this out. The same goes for funding. We need to fund the humanitarian aid and the accommodation for those who would like to stay. The Government has received corresponding instructions and we have already reached agreement. We will either issue an executive order or amend the law, but we will make the funding available.

Over to gratitude to our employees. This is their work. I will hug and kiss them all. This would be enough for a start. However, we should wait until we see the results. We have to judge by the results. If there is anyone the state should reward, it is primarily people like you. As for those for whom this is just a job – we will not forget them, but we will assess the results.

Regarding those in Ukraine who refuse to provide aid or pay allowances. There is nothing we can do about this. I can tell you in this connection that here too bureaucrats do not always do their job properly in certain situations, while in Ukraine this is even more complicated, and there are all sorts of people there. However, if some bureaucrat, as you mentioned, said that Kramatorsk or some other city is not really Ukraine – well, that person is a fool to boot. Not only did he fail to do his duty, but he is also committing a crime against his own country by knowingly cutting its territory. I do not know if anyone authorised him to say so, but I think this is foolishness. There is nothing we can do about this. What can we do? As I have already said, we can and will render aid and support, and I would like to reiterate that we will try to do this not unilaterally, but jointly with the Ukrainian authorities and the people who live in the southeast of Ukraine.

Now over to the legal issues pertaining to providing advanced medical assistance to people without citizenship. I was not aware the problem even existed. We will try to amend the legal base as much as possible to rule out such obstacles.

Regarding university graduates who would like to stay, who do not wish to return to Ukraine because of the situation there – this is understandable. I also agree on this and we will help them.

Now over to another issue that was mentioned today. Despite all the problems that draw our attention to the developments in Ukraine, that attract public attention, we should never forget our own issues dealing with society and the state in the social, political or any other sphere. Corruption remains a grave issue. We should never forget our own problems and deficiencies. Therefore, all the proposals made here will be at least considered, while we should also try to jointly organise this work.”