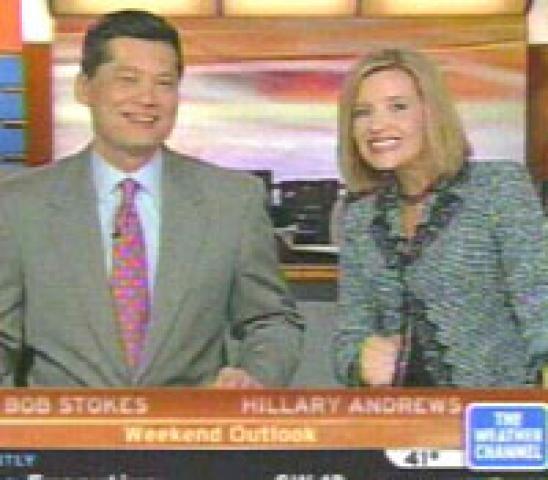 Details are emerging that weather forcaster Hillary Andrews won a sexual harrassment case on January 31, 2008 against her former colleague Bob Stokes, gaining an undisclosed monetary award as a result.  Both worked for the Weather Channel,  which threatened toi sue Ms. Andrews when it learned that she would make public news of  the award. Now Andrews is suing The Weather Channel in retaliation, alleging that the network "allowed her to be sexually harrassed" by fellow on-air meteorologist Bob Stokes.

The official report, available on The Smoking Gun, details that when Andrews "rejected Stokes’s romantic advances, he retaliated by…sabotaging her work on air." It states that The Weather Channel "tolerated" Stokes because he had high on air ratings. It ads that Andrews’ reward for winning the sex harrassment case is "subject to no requirement for secrecy."

– "Will you lick my swizzle stick?"

– "It tortures me when you where those heels and skirt"

He also allegedly interrogated Andrews for hours about details of her sexual life and partners. Andrews requested to be transferred continuously over a period of two and a half years, meeting with management five times.  Hillary Andrews states that she knew complaining to Bob was tantamount to "career suicide," and that Bob Stokes knew this as well.

The Weather Channel has ample reason to hush the story up– they are in the midst of negotiations to sell the cable network for a sum in the billions.