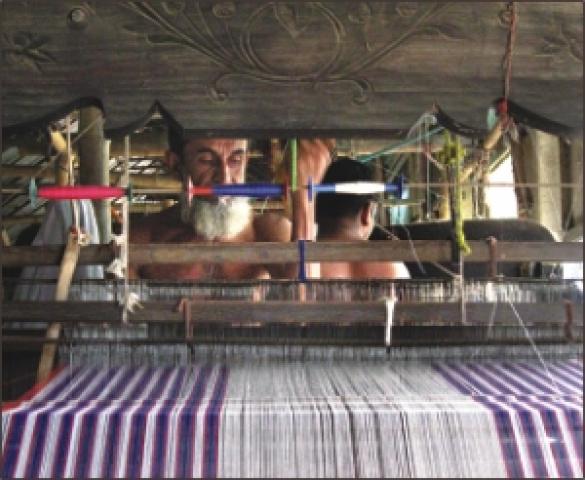 Weaver Abdus Sobhan Mian pauses to rest his aching feet and hands. After a long deep breath, he renews the shuttle with red yarn.

The 60-year-old weaver has been toiling since dawn, crafting a colourful women’s scarf. He has completed one and is almost done with the second — a white and blue striped medley.

He soon gets back to the rhythmic motion of his limbs. His right arm moves in the direction of upper right to lower left, to let the shuttle run between shafts. His left arm continuously presses a heavy wooden bar towards his torso, ensuring fine texture of the fabric.

The factory he works for is a handloom one. Parallel to it is another one, — not a handloom unit but an electricity-powered loom unit, weaving much quicker through machines than what Sobhan and his mates do in the handloom unit.

“It (power loom) is going to seize many of our means of livelihood. Once we woke up to the sounds of the buzzing handlooms. But those are days gone by,” lamented elderly Azizul Haque, descendant of a family long associated with weaving, at Shekherchar of Narsingdhi.

Haque and his relatives left weaving years ago amid a dearth of capital that was needed to switch to power looms. He now collects tolls in favour of an Islamic educational institute, Madrassa, at Shekherchar, Narsingdhi. This area was the second biggest hub for handloom products until the early 1990s.

The region however notched down in its ranks against other areas such as Tangail and Pabna, mainly because of an emergence of power looms. Merchants made their debut with low-priced coarse variety saris and grey cloth. It led many weavers, mainly the subsistence ones, to switch professions.

Some weavers, who were relatively well-off in terms of the number looms and the capital they possessed, managed to sustain the high tide by shifting their focus. They began to make other clothing items like gamcha and fabrics for boutique stores.

“I used to weave a coarse variety of a sari. But the demand for these sari dropped as printed saris came into play,” says Abdus Sobhan, also a freedom fighter.

“Had I shifted to production of fabrics in the past, I wouldn’t have witnessed such fate," he says, who was previously working at the Shuvo Weaving at Shekherchar, Narsingdi.

Sobhan and his relatives jointly owned 250 looms, prior to such times of difficulty. He now counts Tk 23 for weaving a five-yard long scarf. His employer, Shafi Mahmud, produces these scarves and other fabrics to meet the demands of foreign and local buyers, mainly the local boutique stores like Kay Craft and Banglar Mela.

Shafi Mahmud has also set up a power loom unit to produce a variety of fabrics and also to increase productivity.

“It saves me Tk 2 per yard if I use the power loom. The typical output of a power loom is between 20-25 yards of fabric, while a handloom conjures only 15-20 yards,” Shafi Mahmud says.

“Once we saw weavers dominate the weekly markets. Now mill owners have captured a majority of the market share, due to high volume production,” says Mahmud, who now owns 20-power looms.

“But if you need to craft designs, you will have no alternative but to use handlooms. Besides, the finishing of products made in handlooms are better than those of power looms,” he says.

Not only in Narsingdi, weavers in other major handloom hubs, such as Tangail and Sirajganj, are switching gradually to power looms, to withstand competition.

Lungi, a traditional men’s wear, is also being produced on power looms.

Power looms have already pushed out the lower-priced segments of the local clothing market.

Currently, a bulk of the country’s total cloth production comes from mills and power looms, as evident from the Handloom Census, 2002-03. The handloom industry, which accounted for about 64 percent of country’s total cloth supply in 1989-99, supplied 28 percent of the total domestic cloth production. The remaining portion has been taken over by mills and power looms, according to the last census.

However, the trade still provides jobs for about 1.5 million people in the rural areas, according to the Bangladesh Handloom Board.

Hopes run high for this sector, as some experts believe that the handloom sector will sustain as the regional demand for items such as the Benarasi, Jamdani and Tangail saris and cotton fabrics are on the rise. This is mainly due to the emergence of hundreds of boutique stores in many parts of the country.

"The persistence of the production and use of handloom clothes in Bangladesh undercut the implicitly evolutionary assumptions of development theories which states that handicrafts would die out with the advent of industrially produced goods," writes Enamul Haque, in the publication titled, ‘Textile Traditions of Bangladesh’.

“The production of hand-woven clothes can partly be explained by the continued demand for such textiles as expressions of traditional and nationalist sentiments and of prestige and status, even while quantities of industrially produced clothes are being consumed as well,” he adds.