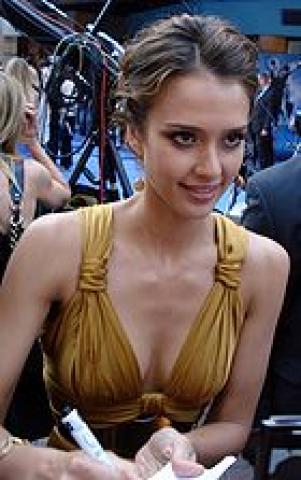 Jessica Alba and husband of seven months Cash Warren had their wedding reception last night in their Beverly Hills home according a report by Yahoo News.

Only close family and friends were invited to attend the wedding in celebration of their May 19 nuptials. Special guest is Honor Marie, their 6 moth old daughter.

Alba met Warren while filming a movie entitled “Fantastic Four” in 2004. Cash is the son of Actor Michael Warren. Jessica and Cash got married in Los Angeles in May 2008. On June 7, 2008, Jessica gave birth to a baby girl. The first picture of the baby girl appeared in OK magazine which reportedly paid them $1.5 million.

Jessica was formerly engaged to Actor Michael Weatherly and had a 4 year relationship. They met while filming Dark Angel. She was 20 years old when he proposed to her. Weatherly was 12 years her senior which caused controversy among Jessica’s family and friends because of the age gap. But Alba said that he was fascinated by older men and she made reference to Sean Connery, Michael Caine and Robert Redford.

Alba was raised as a Roman Catholic and still considers herself “spiritual”. In her adolescence, she became born again Christian but left the church after four years because she felt she was being judged for her appearance, explaining: “Older men would hit on me and my youth pastor said it was because I was wearing provocative clothing, when I wasn’t. It just made me feel like I was in any way desirable to the opposite sex that it was my fault, and it made me ashamed of my body and being a woman”.

Jessica is getting involved in charity work with her participation in Habitat for Humanity and the National Center for Missing and Exploited Children. Recently she endorsed the candidacy of Barack Obama for the US presidency.