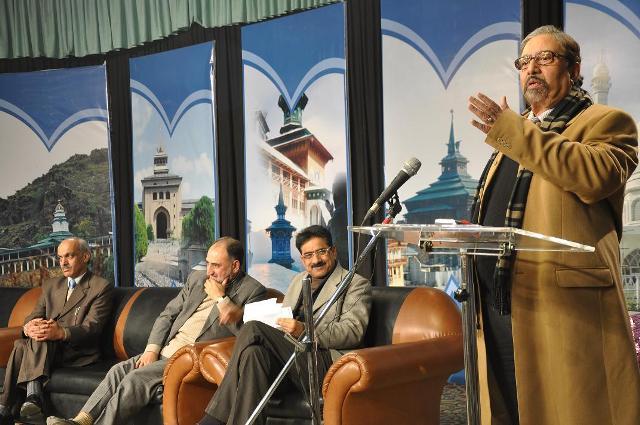 , February 02 (Scoop News) – To propagate and spread the philosophy and message of Sheikh-ul-alam popularly known as the Alamdaar-e- Kashmir far and wide across the globe, the public broadcaster Doordarshan Kendra (DDK) is soon going to start a weekly program on the life and teachings of the revered saint.

This was stated by Director DDK Srinagar Dr Rafeeq Masoodi while speaking at a symposium ‘Sheikh-ul-alam- the symbol of Kashmiri ethos’ which was jointly organized by DDK Srinagar and Markaz-e-Noor, Sheikh-ul-alam chair Kashmir University held at DDK Srinagar here on Wednesday.

While co-hosting the symposium Dr Masoodi said “We are going to start a weekly program on DD Kashir which would be based on the life, philosophy, teachings and poetic-renditions of Alamdar-e-Kashmir. The aim here is to inculcate the feelings of research and exploration amongst the younger generation so that new shades and dimensions of Sheikh-ul-alam’s philosophy would come to the fore and a debate is initiated from this platform of DD which would highlight his contribution in shaping the cultural and secular ethos of across the globe.”

Terming Sheikh-ul-alam as an embodiment of universal truth and compassion, Dr Masoodi said that the Shrukhs (poetic renditions) of the venerated saint explain the entire philosophy of life and these sayings and renditions or poetry is as relevant today as was 600-700 years back.

Dr Masoodi said that the public broadcaster would always be there to co-ordinate with any forum or institution who are working in this direction and maintained that few chunks are already there on DD Kashir which has been dedicated for this noble cause.

“There is already a filler broadcasted on DD Kashir called Charag-e-rah during different intervals where the Shrukhs of Sheikh-ul-alam are translated from Kashmiri into Urdu and English and this has been going on for last three years. However we believe more needs to be done and the weekly program would be an endeavor in that direction,” said Dr Masoodi.

Speaking on the occasion Vice Chancellor Kashmir University Dr Riyaz Punjabi said that Sheikh-ul-alam is and will continue to remain the reference point for Kashmiris for all times to come as he laid the foundation of Reshi movement in .

“In order to understand Sheikh-al-alam we need to understand the core of his philosophy which is universal and cannot be confined to a particular sphere of life or region of the world. He transcends all geographical barriers and conquers time and space. He is epitome of socio-cultural landscape of but his teachings and philosophy of life are universal for entire humanity,” said Dr Punjabi who was chief guest of the occasion.

Calling upon the scholars, writers, historians, academicians and other intellectual sections of the society to come together in exploring and researching the rich treasure which we inherit from Sheikh-ul-alams rich legacy, Dr Punjabi said “We should strive hard for unraveling the strings of rich treasure which Sheikh-ul-alam has left behind and focus should be on those areas which have not been touched by scholars and historians yet as far as the socio-cultural dimension of Alamdar-e-Kashmir’s life is concerned  and efforts should be made to incorporate these values and teachings into our academic curriculum at school and college levels.”

Dr Punjabi emphasized on translation of Sheikh-ul-alams Shrukhs in different languages and dialects so as to promote and propagate his philosophy across the entire globe.

Earlier while tracing the history of Sheikh-ul-alam chair at Kashmir University, Chairman Markaz-e-Noor Sheikh-ul-alam chair Professor Bashar Bashir said that the chair which was established in 1998 would continue its mission of exploring new and hidden facets of social, Political, cultural and religious life of Alamdar-e-Kashmir and several such symposiums and programs would be organized through mediums of television and radio where people would share their experience with viewers and listeners.