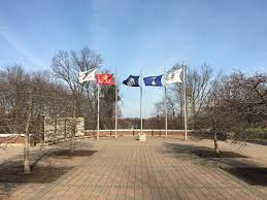 The Veterans Administration organized a nationwide function on the 29th of March this year. The purpose was to recognize and “welcome home” all Vietnam veterans. It was pretty low-key, but events were being held in 5388 locations around the country. I saw an announcement of it in the local paper. It was to be held in the Scottish Rite Event Center in Mission Valley of San Diego. If you want to be enlightened or possibly confused about just what a Scottish Rite is, have at it. It has something to do with being a Free Mason or possibly a Freemason, and not much of that has to do with masonry, plaster or brick-laying. But never mind all that, the place is a big bland hall used for meetings and perhaps weddings if the church of your choice is full or you’re not a church person. I don’t think you can practice the black arts there, maybe the grey ones.

So I called up my friend John Blake, a Special Forces veteran of Vietnam, and said, “I have no idea if this is worthwhile or not, but we’re neither of us doing anything on Thursday at 1100, and it’s close to where you live, so let’s go. If it’s stupid we can always leave.” John turned out to have an extra baseball cap with a SF logo on it, so suitably attired off we went.

There we a LOT of people there, maybe as many as five hundred. More than the organizers had anticipated; they ran out of tables and chairs so a lot of us just stood along the walls or at the back. The people who showed up were 90 percent men, no suprprise, and old. They looked old and a lot of them looked, well, weathered. Lots of grey hair and lots of grey hair in pony tails. No one was wearing a suit, except the VA guys, but everyone was wearing a ball cap or a vest or a t-shirt that said something about having been there—Marine, Navy, Air Force, Army, nurse corps, you name it. The garments looked like they’d been worn a lot. We all stood around in the hall outside, waiting for things to begin and stealing glances at each other to see if we recognized anybody, or any of our old unit insignia.

When the doors to the banquet hall opened, the VA people formed a corridor into the room and as the vets entered, they clapped, waved small American flags, shook our hands, and said to each of us, “Welcome home.” It sounds hokey, but it was really nice. Even the most cynical among us, which would probably include me, choked up a little.

Once everyone got inside and got situated, the Marine color guard from Camp Pendleton presented the colors and we all stood and saluted. Someone sang the National Anthem.

There was a small stage across the front. The MC, Bob Lawrence, a local radio announcer (and veteran) introduced a Chaplain, and there was an invocation. There were several VIP’s introduced, none of whom were Congressmen, local legislators, or mayors or city council members. There was one person from the office of the Mayor. Several people spoke, some VA officials and several veterans, including a wonderfully articulate former nurse, an impressive African American woman named Joan Craigwell. She had been in Vietnam during the Tet offensive.

There was no bitterness in any of the remarks and no chest pounding. There were several remarks that seemed good humored. The keynote speaker started by saying, “I can’t tell you how good it feels to be in a room full of folks who understand firearms.” He also touched carefully on the underlying theme of the ceremony, noting that “our enemies gave us more respect than the people who we were fighting for.” But all the speakers acknowledged that in the case of Iraq and Afghanistan, the country was “no longer confusing the war with the warrior” and the returning soldiers were being honored and respected. Even these minor political references were brief. There were many more references to guys who had trouble adjusting when they came home, and to the services that were now available for them. This was before PTSD, an awful consequence of war’s stress and the inhumanity of the experience, was made legitimate. There were a couple of well executed videos, including one about MIA’s.

The ceremony included box lunches with sandwiches, an apple and some potato chips. There were bottles of water at the back. The whole thing was tasteful and appropriate and even pleasant.

At the end of the speeches, the VA employees circulated through the crowd giving out small lapel pins. The pins showed a bronze image of an eagle’s head in the middle with a dark blue border and the words “Vietnam War Veteran” inscribed in the border. Unless you already knew what it was, you’d have to be about 10 inches away to figure it out. I thought that was just fine.

The occasion for this recognition was billed as the fiftieth anniversary of the Vietnam war. It was authorized by an Act of Congress in 2008 and has its own web site. I pondered this as I stood listening to the speeches. How can you have a single day be the anniversary of a war that took eight plus years, or really twelve if you count honestly? Fifty years ago was March 29 1966. Look as you may, it’s not easy to find anything consequential that happened in Vietnam on that day. Muhammed Ali beat George Chuvalo in a heavy weight boxing contest and the government of Quito was overthrown – surely you remember President and Rear Admiral Ramón Castro Jijón – but that’s about it.

Here are some key dates for the conflict:

March 8, 1965 -First ground combat troops, the Marines, make an amphibious landing in Da Nang. The landing is not only unopposed, the Mayor of the city is there to greet them.

March 29, 1973 – “For you the war is over” – the final US troops withdrew from Vietnam; but this was not fifty years ago, it was forty-three years ago.

None of that date quibbling is important, really. What’s important are the lessons.

None of the speakers dwelled on the unpleasant statistics:

—Nine million Americans served in uniform in Vietnam during the eight years of the conflict; seven million of us are still alive.
—58,168 were killed in combat
—1681 are still missing in action

No one talked about how much the war had cost. No one mentioned the agonizing rift it created in the politics of the country, and the damage it did to the military. No one mentioned the ugly truth about it all, all the lost blood and treasure: It wasn’t worth it. We didn’t “stop communism,” we didn’t stop authoritarian governments from taking over all of Vietnam. We didn’t stop a domino from falling as Cambodia became an authoritarian government as well. Although perhaps not a perfectly communist one, as eventually Vietnam went to war with the Khmer Rouge’s bloodthirsty regime, but not before these fanatics managed to kill about twenty percent of the country’s citizens.

And so today? Vietnam is a nice place to visit, a developing economy slowly embracing capitalism but not really democracy, and a potential US partner if things with China get unpleasant. Relations between the two former enemies are so cordial that the US recently announced it would sell some offensive weapons to Vietnam.

What do the Vietnamese think? There is a museum in Hanoi that highlights the US war, including an odd sculpture in the back courtyard made up of jagged pieces of aluminum from shot down US planes. And a similar museum in Ho Chi Minh city, now called the War Remnants Museum, although it was previously known as the “Exhibition House for US and Puppet Crimes”. But “the Nam” of GI days is not there. Tu Do street, where all the bar girls hung out, is now nothing but high end stores—Burberry, Chanel, Moschino, and so forth. No bars and no bar girls that I could see. And the Cu Chi tunnels have morphed into a tourist attraction.

There were three other vets along on a tourist trip to Vietnam that I took last November. All four of us were pretty curious about how the country looked and how the people felt. Our guide was 35 years old. He wasn’t even born during the war. At one point one of our guys flat out asked him what, given the war and all, the Vietnamese felt about Americans. “We like Americans fine,” he replied, “you were just one more war.”

Enumerated from a US point of view, the war in Vietnam was four wars ago. I can only hope we find a President who doesn’t raise that number to five, or at least not soon.