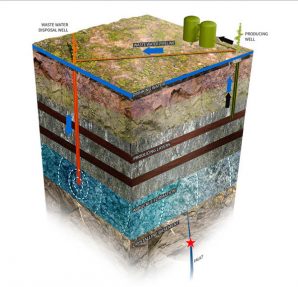 For Okies a beautiful September morning became much less beautiful after the state of emergency declaration caused by rather sensible earth shocks. However such phenomena have become a practice for them. They experienced 226 more than 3.0 magnitude earthquakes in just the first two and a half months of 2016. So it is no surprise that the straw broke the camel’s back, and State Governor Mary Fallin ordered 37 disposal wells used for fracking in the Arbuckle shale formation to shut down over the course of 10 days. 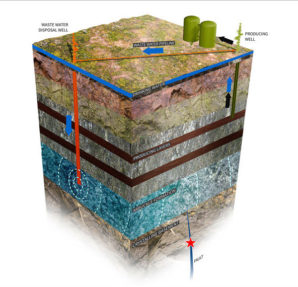 This instigated critics of a bunch of “thinkers” paid by oil companies accusing government scientists of “unscientific concepts” and intent to undermine a domestic gas and oil production. It seems that such point of view comes from the same excess of imagination that hasn’t allowed them to choose between Creationism and the Darwin’s theory up till now. Funny, their imagination fails them when they have to imagine that “a small, small man and a little water” are perfectly capable to cause a shift in the tectonic plates. Meanwhile this is their basic point for all other arguments and accusations. Certainly, cold hard facts and statistics without any pictures cannot influence those experts’ opinion. According to their own words under anonymous nicks, all of them are professors of Geology from leading universities and just Oklahoma City or Omaha dwellers.

The partition-wall collapse, cause by wet in a small crack under the stucco coat; displacement of the water masses center in a reservoir after a dam construction; Earth crust erosion during mere coal mining, – they’ve never heard of such things. Physical science isn’t strong suit of these individuals. Nonetheless, these very people have been lulling entire America with fairy tales that fracking is a GOOD thing, because it “fractures” big earth shocks into several lesser ones ending without heavy destruction and victims.

What has been really happening under America, if 5-5.8 magnitude earthquakes are small ones, according to these poor experts? Mind you that this is about Oklahoma, the state with 5.5 magnitude earthquake 1952 considered the biggest disaster till 2009. That time walls were cracked, windows were broken, and bricks were loosened from buildings. If so, America would fall into the earth in July, 2015, while Oklahoma was shaking 40 times a week.

This is how conspiracy theories’ been invented. The key point is to assert convincingly that everyone tells lies. Officials tell lies about 5,000% increase of earthquakes number in 2014. The US Geology Survey scientists tell lies about a direct correlation between the increase in Oklahoma earthquakes and using the disposal wells in shale oil and gas drilling. No care a spit that these scientists started studying groundwater pumping influence at seismic activities decades ago. Governor Fallin also tells lies acknowledging the link between earthquake clusters and fracking operations. All of them are saboteurs much desiring the sooner collapse of the great United States.

Another category of more sensible coach-based experts advocate for change-over from cheap but dangerous disposal wells to recycling and EOR (this is a “less arguable” technic of shale extraction), as it practiced in, let’s say in Texas. From this side, Oklahoma state officials have been accused of indolence and willful creating of situation, which would cause cease shale oil and gas extraction. At the same time they once again ignore such things as a costly characteristic of these techologies, or a chartered scientists’ opinion. For instance, a study published in the Proceedings of the National Academy correlated 93 small earthquakes near Snyder city (Texas) with underground injection of large volumes of carbon dioxide . Also they prefer to leave out specialties about high prices of transporting the wastewater to recycling facilities.

It’s sad and shameful that such detailed, “well grounded” articles by amateur experts are not unusual. These people have their communities, their audience, and a great skill of a schmoozing. This is because of the last one the US Government has been turning a blind eye to the energy corporations activity envenoming life of millions of taxpayers for seven years. BTW, each year subsidies and tax credits for shale resources productions are included in the Federal budget at those very taxpayers’ cost. However neither psychological, nor property damage of ordinary public is never come into account.

Just recently governments of some states have started to wake up. It must have happened after a good shaking. Official statements of government scientists couldn’t rouse them. It has been 5 months since USGS warned that oil and natural gas drilling with using disposal wells caused lots of “induced earthquakes” at a wide swath of the country including a stricken area, to the Saturday aftershock. But Mrs. Fallin has barely started taking post factum measures that had to be preventing ones. 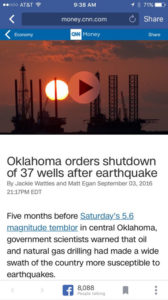 This happens because the energy corporations’ interests are placed ahead of the interests of average citizens parasitized by these business giants. Indeed, “research and response” efforts of finding saver and cheaper methods of drilling require time and investment. But American corporations prefer to take all at once, even if it would be to the detriment of future profit. Safety and environment are such a nonsense never been reckoned with.

Filed under: Energy, News
Share Tweet Pin G Plus Email
previous article: 5 Simple Exercises For Having More Self-Control
next article: A Look at How Social Media Is Impacting Divorce Cases