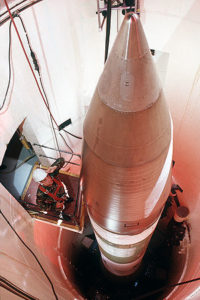 The deadly “city killer” the LGM-30 Minuteman is a United States land-based intercontinental ballistic missile (ICBM), in service with the United States Air Force Global Strike Command. As of 2010, the LGM-30G Minuteman III version is the only land-based ICBM in service in the United States. Each missile carries up to three nuclear warheads, which have a yield in the range of 300 to 500 kilotons. It has a range of over 8,100 -10,000 miles (Exact is Classified) miles (13,000 km). The current US force consists of 450 Minuteman-III missiles in missile silos around Malmstrom AFB, Montana; Minot AFB, North Dakota; and of course F.E. Warren AFB, Wyoming.

On January 9 2014 Secretary of Defense Chuck Hagel spoke at the F.E. Warren Air Force base in Wyoming.

Here is some of what the Secretary had to say:

“I want to make a couple of comments that, in particular, I think are important for you to know and for you to hear, but I think all of our people in our services, but all the American people, and that is that the United States is going to remain committed, strongly committed to maintaining a capable and effective, safe, secure nuclear deterrent.  We’re going to do that.  We’re going to continue to do that.”

“We’re going to invest in the modernization that we need to invest in to keep that deterrent stronger than it’s ever been.  And you have my commitment to that.  You deserve to know that”, said Hagel.
“As you all know, under START [Strategic Arms Reduction Treaty] II, which I think is the appropriate focus, on reducing our nuclear weapons, we’ll continue to follow that — that focus and that approach and work through the agreement in that New START treaty.  It’s clearly in our national security interests, and we will continue to be part of that effort, not just the leadership, but the day-to-day operations, as we modernize our system and our infrastructure”, said Secretary Hagel (source: DOD http://www.defense.gov/transcripts/transcript.aspx?transcriptid=5350).
See related article: Defense of Defense visits Air Force base in Wyoming http://www.kmvt.com/news/latest/239646281.html
Filed under: Military, News
Share Tweet Pin G Plus Email
previous article: A coordinated emergency response to the arctic blast last week in Indiana saved lives
next article: Rep. Pitts suggests members of Congress may have been among those concerned about their credit cards being replaced after security breach at Target?