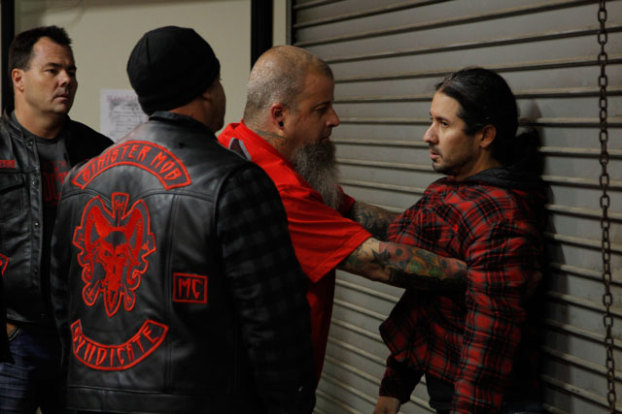 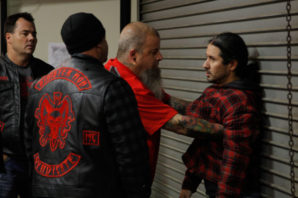 Sin Mob Syndicate – roust “snubs” a confidential informant for the Laffing Devils MC club. Rockem – the leader of Sin Mob is pictured in left hand corner of the photo.

Is the Sin Mob Syndicate real? Inquiring minds want to know – so we went in search of answers. First Sin Mob is real – as real as a freaking heart attack! Second –  we found out that  Rockem (Aka: Ralph Randolph) was a former U.S. Marine?

The U.S. Marines are about “Duty, Honor, Corp, God and country” – the exact opposite of almost everything the Sin Mob Syndicate believes in and stands for.

The Sin mob currently engages in all sorts of criminal activity, including possible ties to Mexican cartel members and its associates.

We contacted the San Diego Gang Task force unit – who verified that Sin Mob is on their radar – but officials refused to say if the gang was under current investigation?

Members of the Task Force also refused to go on record with any comments regarding the group specifically.

One official, who refused to identify himself for security reasons indicated that they don’t divulge names out of fear such criminal groups could target their friends or family members.

Members of the San Diego gang task force unit are part of the Special Investigations Division (S.I.D.) which consists of multiple teams or units that are responsible for the investigation of criminal enterprises relating to narcotics, organized crime, terrorism, and the apprehension of fugitives.

How in the world this man Rockem – degenerated to the point of becoming a 1 percent-er for a notorious Motorcycle club in the first place – remains a mystery.

According to Rockem’s webpage – he is a shameless self promoter:

“Recognized as a National Builder, Ralph Randolph has received many awards from high profile events such as EasyRiders, AMD and V-Twin. He is also a 12 year veteran pilot and a Marine Corps graduate.

When Ralph is not busy building bikes or flying planes, he is entertaining the masses on the Discovery channel. He is a prime star in the new TV series, The Devil’s ride: He plays “Rockem”, the Vice President of the Sinister Mob Syndicate MC Club out of San Diego, California.

He has also appeared in other TV shows such as CMT Chopper Challenge, Warbikes.com and Steel Dreams and recognized by magazines such as Hot Bike, V-Twin, American Bagger and Biker.

Regarded as a true rider within the industry and among his peers, Ralph can always be found at the front of the pack. Being a man of many talents, Ralph’s attention to detail and crafted ideas have driven the desire of perfection in everything he does. And as his famous saying goes, “Don’t dream about it, LIVE IT”.

Randolph (aka: Rockem) is currently engaged in a war of sorts with the notorious MC club”Laffing Devils”, which is currently being played out on TV via the Discovery Channel. The group self promotes on twitter and other social networking sites.

NOTE: A Nomad is an individual who may or may not be a member of an “outlaw motorcycle club” , and not bound by geographic territory, or perhaps one which has not yet established one.

There are exceptions to Nomads being members of outlaw clubs. One instance is military veterans’ clubs, whose members may be scattered across the U.S., but yet do not have enough members in a particular area to form a club chapter.

The U.S. Marine Corp code of conduct says in part:

I will never forget that I am an American, responsible for my actions, and dedicated to the principles which made my country free. I will trust in my God and in the United States of America.

Apparently Rockem has thrown that creed “out the window” – as he goes about setting a bad example for various youth who look up to him as a sort of misunderstood Anti hero. What a waste!

We also contacted the U.S. Marine Corp press office via the Pentagon and officials refused comment in regard to this situation, which one called “disgraceful.” That officials then refused to go on record with that comment apparently out of fear of retaliation from criminal members of the Sin Mob group, who are based in San Diego where this Marines family resides? The Marine Corp officer then said that policy in the U.S.M.C. is not to comment or talk with “unauthorized members of the press” (me)?

How you can take a stand against Sin Mob:

In light of the fact that Rockem is a leader of a notorious motorcycle gang engaged in all sorts of criminal activity – viewers of “the Devils ride” are discouraged from purchasing merchandise relating to the Sin mob (or Laffing Devils) motorcycle club.

Certainly no decent, self respecting  person would want to inadvertently support or condone criminal activity by buying merchandise which could profit this or any other 1 percent-er motorcycle club.

Voice your protest by writing Discovery Channel and please “under no circumstances” – support sponsors of this program.

Log your protest with Discovery Channel directly at http://corporate.discovery.com/contact/viewer-relations/