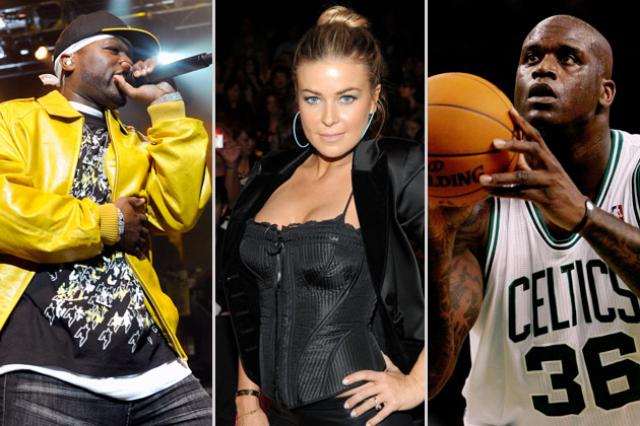 Over the weekend, the popular rapper 50 Cent urged his 3.8 million Twitter followersto buy the stock of a microscopic company in Florida. The penny stock jumped 290 percent on Monday. The rapper, who owns 7.5 million shares and warrants for 22.5 million more in the company, had a paper profit that was briefly worth almost $5.2 million on paper.

The company, H&H Imports, sounds like it might be related to the famed maker of New York bagels. No such luck. H&H is a Clearwater, Fla., company that distributes headphones favored by Curtis Jackson, the real name of rapper 50 Cent. It’s the parent company of TV Goods Inc., which markets its products through infomercials and the QVC channel, has virtually no revenue ($293,000 in its most recent quarter), and loses money.

"HNHI is the stock symbol for TVG there launching 15 different products. they are no joke get in now," went one promotional tweet from the rapper.

As the Twitter hype (Twype?) wore off, the stock fell from 39 cents to 30 cents a share on Tuesday and a further 4 cents Wednesday morning, meaning 50 Cent gave back just over 290 million cents ($2.9 million dollars). The company has a miniscule market capitalization of $63 million. It traded for 10 cents last week.

Strip away the involvement of a celebrity and the use of social networking and this story bears some resemblance to one of the oldest stock market games around: The pump and dump.

In their classical form, such schemes work this way: Insiders talk up the attributes of a worthless stock (the pump) and then sell when its price jumps (the dump). So far, 50 Cent appears to have avoided violating laws against this sort of behavior because he has not sold H&H stock.

A spokesman for the rapper pointed out that the 7.5 million shares are restricted — meaning they can’t be sold until certain conditions are met. The warrants allow him to buy up to 22.5 million shares, which gives 50 Cent a powerful incentive to talk up the stock. They can only be profitable if the price of H&H rises above certain thresholds. He paid $750,000 for the shares and warrants.

"This kind of stuff has given the SEC headaches for a long time," says Rick Sauer, a former Securities and Exchange Commission attorney who wrote a book about fighting stock fraud at the agency called "Selling America Short." "It’s probably OK unless he knew the stock was bad and touted it anyway, which is hard to prove."

An amateur boxer and drug dealer who turned to music after a stint in prison, 50 Cent’s most famous record is entitled "Get Rich or Die Tryin’." He is known for his muscular physique and for surviving an attack in which he was shot nine times at close range.

But 50 Cent apparently has little taste for a fight with securities regulators.

Several hours after his first tweet about H&H, 50 Cent tweeted some suspiciously sober cautionary notes. I’m taking a wild guess that they were suggested, though not copy-edited, by a worried lawyer. And the initial promotional tweets were wiped from Twitter, though they live on forever on the web.

Celebrities, often off the B and C lists, seem particularly attracted to penny stock promotions. Or, perhaps more accurately, they are particularly susceptible to offers to shill for stock promoters.

Carmen Electra, the Playboy model turned actress, has made ahabit of pitching bulletin board stocks. A few months ago, the SEC sued the guy who played the blond partner of Erik Estrada in the 1970s cop-show ChiPs, charging him with securities fraud. Even Shaquille O’Neal, the NBA star with a massive Twitter following, has promoted a microcap stock that he owned, which subsequently plummeted.

And yes, it’s amazing that the penny stock market, a Petri dish of fraud, exists at all. It’s caveat emptor all the way.

But is what 50 Cent did really that different from what happens all day long on CNBC when professional money managers take to the airwaves to praise the stocks of companies they already own?

Back in the days of the Internet bubble, the SEC charged a 15-year-old kid, Jonathan Lebed, with engaging in a serial pump-and-dump operation, which netted him hundreds of thousands of dollars.

Michael Lewis, in a famous piece in the New York Times Magazine, argued at the time that there was little distinction between Lebed and the Merrill Lynches of the world. Indeed, a few years later, then-New York Attorney General Eliot Spitzer wrung a $1.4 billion global settlement out of Wall Street for promoting stocks that they privately didn’t believe in.

The blurry line between "respectable" money manager and celebrity shill was blurred last Friday, when 50 Cent himselfappeared on CNBC. Dutifully, the CNBC host asked 50 Cent for an investment idea. The hip-hop star replied that he was putting his money into Gunnar Optiks, a company that makes glasses that protect eyes from the strain of looking at computer monitors.

Inform our investigations: Do you have information or expertise relevant to this story? Help us and journalists around the country by sharing your stories and experiences.