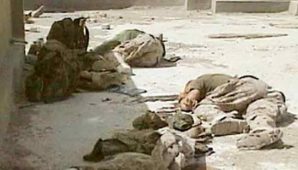 “Yesterday I listened with dismay when the Republican leader suggested and claimed that President Obama prematurely withdrew troops from Iraq. Think about that for a minute–5,500 dead Americans, tens of thousands wounded. Thousands and thousands have been wounded grievously”, said an exasperated Harry Reid. Pictured here: Dead marines in Fallujah, Iraq

On June 18, 2014 Senator Reid asked for permission to address the United States Senate regarding the situation in Iraq.

As the Senate Majority leader his opinions are particularly relevant to any discussion dealing with war and peace:

“Over the last several days the world has looked in horror as the terrorist organization ISIS, the Islamic State of Iraq and Syria, has swept across Iraq. As we speak they are sweeping even closer to Baghdad. They are murdering and they are pillaging. The group is now positioned outside Baghdad. It threatens to unleash its violent extremism on the capital of Iraq. ISIS poses a threat to Iraq and the surrounding region–and that is an understatement.

As President Obama and his advisors consider options to combat the threat, conservative Members of Congress–or I should say Republican Members of Congress and their pundit cheerleaders–are more interested in playing their favorite game–their favorite game: blame Obama. It doesn’t matter what it is, it is his fault for putting people’s lives in jeopardy–our military, special forces. The FBI captured someone who was the ringleader of the Libya Benghazi attack. They have criticized the President for bringing this man to justice.

Yesterday I listened with dismay when the Republican leader suggested and claimed that President Obama prematurely withdrew troops from Iraq. Think about that for a minute–5,500 dead Americans, tens of thousands wounded. Thousands and thousands have been wounded grievously.

What has been taking place in Iraq is a civil war. Do the Republicans and their leader believe that service men and women from Kentucky and the other 49 States across this great country should be inserted in the middle of their civil war? I don’t think so. Fighting between factions in Iraq has cost thousands of Iraqi and American lives over the last decade, and it spawned a new breed of terrorism now. Yet the original architects of the war–of the invasion of Iraq–would have us believe that this is all President Obama’s fault. Think about that.

Is there anything further from the truth?

I don’t think so. This is an Iraqi civil war, and it is time for the Iraqis to resolve it themselves. Those who attack President Obama for bringing our troops home from Iraq are wrong and out of step with the American people. After a decade of war the American people have had enough. American families have had enough. I do not support in any way putting our men and women in the midst of this civil war in Iraq. It is not in the national security interests of our country. It is not worth the blood of American soldiers. It is not worth the monetary cost to the American taxpayer.

How about doing a better job of educating our children? Maybe we could raise the minimum wage or give the long-term unemployed unemployment compensation or maybe we could help men and women draw the same amount of money for doing the same work or maybe we could fully fund the Veterans’ Administration and ensure that our veterans–more than a million have come back from Iraq–are getting the care they need and deserve. Instead of addressing these issues at home, they are stuck in the same game. And it is not blame Obama; this is a new one–new yesterday or the day before. They are stuck listening to the very same neocons–obviously, that is where the Republicans are getting their information again–the same neocons who pushed us into the Iraq war in the first place, as they try to plunge our military in yet another foreign misadventure.

What is absurd is the fact that after all these years their suggestions haven’t changed. They are in a time warp. Those who are the so-called experts are so eager to commit American soldiers to another war. Why is their advice so valuable?

Take President Bush’s Paul Wolfowitz, who some say was the architect of the war. He has accused President Obama recently of not taking a strong position in Iraq. Wolfowitz took a strong position on Iraq’s sectarian violence when he stated–listen to this bizarre statement–and this is a quote: “There’s been none of the record in Iraq of ethnic militias fighting one another.” No, only for centuries. Look at what he said: There is none of the record in Iraq of militias fighting each other. That is Wolfowitz.

How about Bill Kristol–not the comedian. He is a writer. Bill Kristol is another one of the architects of the Iraq war who infamously predicted that American soldiers would be welcomed as liberators in Iraq. He said the war would last 2 months. Well, he was only wrong by about 9 years and 10 months. Kristol also claimed there was no evidence of discord among Sunnis and Shiites in Iraq. No? Only centuries of discord–centuries. Yet even in light of this incorrect assertion about Iraq, Kristol went on to say that we need to have more fighting in Iraq, beating the drum alongside all the neoconservative friends.

This morning there was an op-ed piece in the Wall Street Journal. Who would write that? How about Dick Cheney? Just to remind everyone, he is the former Vice President of the United States, who clearly was the chief architect of the war. If there is one thing this country does not need, it is that we should be taking advice from Dick Cheney on wars. Being on the wrong side of Dick Cheney is being on the right side of history.

President Obama and his military advisors are considering their options to address ISIS, but putting combat troops back in Iraq isn’t one of them. I have no doubt that President Obama and America will meet this threat head-on without the advice of Wolfowitz, Cheney, Kristol–the architects of the invasion of Iraq. President Obama will meet the threat with the same smart foreign policy which has been the hallmark of his administration. The President will continue to identify and protect what is truly in our national security interests, using our full array of national security tools and standing up to terrorism where it threatens our national stability”, said Senator Reid (source: Congressional Record http://thomas.loc.gov/).