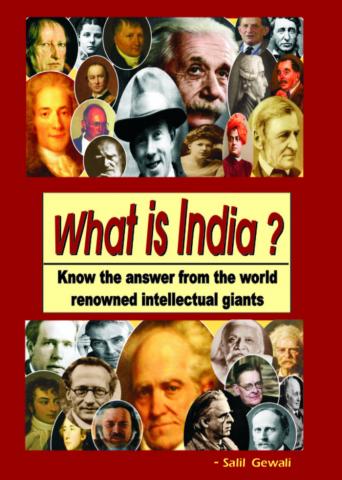 Salil Gewali’s ‘What is India?’ is unambiguously an excellent compilation of the world’s most esteemed thinkers’ views on the intellectual wisdom of ancient Vedic India

In the pre-industrialist era, the west and other parts of the world had a dire feeling when someone mentioned the name India. However, it has changed with the course of time, the greatest of the greats in the western intellectual circle showered praises on the pristine culture, values and philosophy of India or Bharat. That exactly the book What is India? penned by Salil Gewali.

Be it Werner Heisenberg, T S Eliot, Voltaire, H G Wells, Mark Twain, Bernard Shaw… the excellent compilation of the quotes of globally renowned personalities in these genre by Gewali makes every Indian to be proud of his motherland.

It was from India, the world heard the mantra (invocation) lokasamastha sukino bhavanthu (May Peace & Happiness Prevail) for the first time. It is an expression of the universal spirit. India is the only land on earth that has sought harmony and blessings for all of creation. The quotations of the great western scholars in What is India? also reinforces the truth that history once neglected: India’s contribution to the world civilization and culture in the diverse shades of knowledge- philosophy, psychology, science, mathematics, astronomy, language, medicine, management, economics, trade etc is unparallel.

Let our future generations know the answer from the world-renowned intellectual giants as author Gewali cited on the cover of the book. It is intriguing to go through some of the quotations in What is India?

One of the greatest scientists of our times, Albert Einstein says, “We owe a lot to Indians who taught us how to count, without which no worthwhile scientific discovery could have been made.”

Modern science, the ideas of physics in particular, has deeply rooted in ancient philosophy of India according to the words of western scientists. Look at the words from one of the greatest physicists and co-founder of quantum physics, Werner Heisenberg: “After the conversations about Indian philosophy, some of the ideas of Quantum Physics that had seemed so crazy suddenly made much more sense.”

French philosopher Francois M Voltaire’s words are the finest illustration of the greatness of this saffron land, “I am convinced that everything has come down to us from the banks of the Ganga-Astronomy, Astrology, Metempsychosis, etc. It is very important to note that some 2500 years ago at the least Pythagoras went from Samos to the Ganga to learn Geometry…But he would certainly not have undertaken such a strange journey had the reputation of the Brahmin’s Science not been long established in Europe…”

To sum up, Salil Gewali, the celebrated writer from Meghalaya, has done an outstanding effort by compiling the book What is India? Beyond doubt, this book will be an inspiration for a country, which is now searching its roots in Vedas. The first edition of the book was released in 2009 and is now going to be translated into Tamil, Telugu, Kannada, Malayalam, Marathi, Hindi and Nepali.