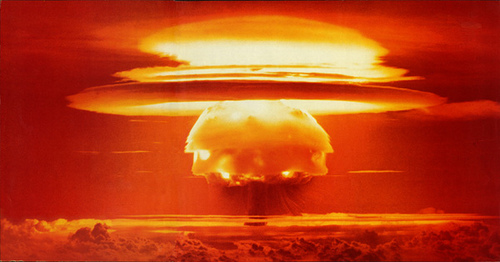 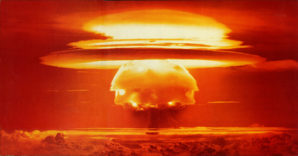 Have you ever wondered what it would be like to survive an Atomic bomb blast almost twice the size of Nagasaki? Just ask those people who did, one man told me flat out what it is like. Then he referred me to the Atomic veterans website for details.

What I found was absolutely shocking.

As part of a series of stories I am doing this veterans day, I have decided to include this in memorial to those men who are almost all dead now.

They have no one to tell their story anymore but us -the living !

This veterans day we remember those who died and lived Atomic bomb tests during the 1950’s, by retelling their stories in their own words:

“When the bomb went off, the ground shook so violently it threw us back and forth in the trenches. The sound of the blast was very, very load and the 23 kilo ton bomb has a lot of kick. I smelled something very acrid and heard a high pitch crack: that sounded somewhat like thunder but with a much higher pitch. The valley went from total darkness to a level of brightness as if 100 suns had come to life at once. I could see rocks on the ground in the bottom of the trench through closed eyelids and as I turned my head to the left, I could see the skeleton on the Marine next to me as if I were viewing a huge x-ray of him. The winds produced by the blast were hurricane strength going out and about half that on the echo return. We received orders to stand and look at the fireball. All the colors of the rainbow were present, it was both beautiful and ugly at the same time (like angry).”

“When the bomb went off, I did not hear the blast and the light was so intense I could see the bones in my hands. The desert became hot and the winds blew across our trenches carrying sand and debris 8 miles back to our transportation staging area smashing the windows…We had to stay in the trench through the second count because the vacuum created by the initial blast caused the wind to return to fill the void created by the displaced air…”