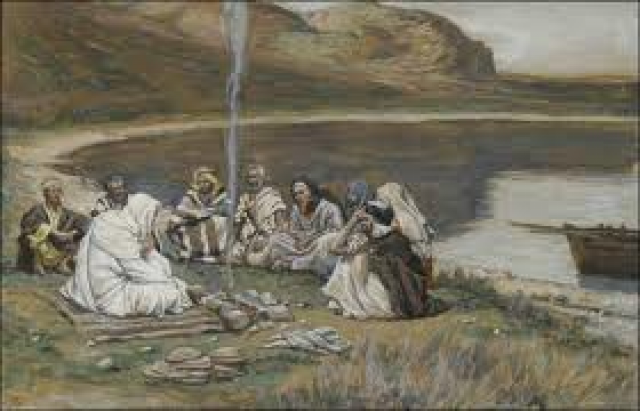 In Matthew 15: 2 The scribes and Pharisees of Jerusalem came questioning Jesus.

"Why do thy disciples transgress the tradition of the elders? for they wash not their hands when they eat bread."

This is a Hebrew or Jewish tradition that is even evident in Jewish life today. All foods must be blest by the Rabbi and even certain foods must be separated from certain other foods.

Jesus realizing that some practices instituted a few thousand years earlier had become archaic especially when it was man’s spirit, not his physicality that was really in question.

Peter, being a plain and simple fisherman, not having received the knowledge and wisdom of the Holy Spirit yet, is not able to understand what The Lord is trying to say so he asks Jesus to explain it. So Jesus goes on to explain it in Matthew 15: 17-20

He explains to Peter a simple fisherman, that the food that you eat is basicly harmless because you put it into your mouth, it goes to your belly and is later passed out.

Jesus then goes on to explain further that the words spoken from one’s mouth, through the heart, these words have the power to defile you, for out of the heart can come such evil things as murder, adultries, fornication, theft, false witness, and blasphemies. All of these are in violation to God Our Father’s Commandments, handed down the Moses and The Hebrew Nation.

What Jesus is telling Peter is that the instant you in your heart, even begin to think to do these things, against someone else, in your heart, in your soul, you have sinned. You don’t even have to actually carry them through to completion, the thought from your heart is considered by God, a sin, a sin that will put your immortal soul in jeopardy.

For Peter, maybe even for some of the other Apostles and disciples of Jesus, as well as for children, for those who know not God, nor His Commandments, something like this would possibly be difficult to understand or comprehend.

Peter and the Apostles thought nothing of sitting down to eat without washing their hands, and as a matter of fact, later Jesus will even teach the Apostles the importance to being seen as serving by washing each others feet too.