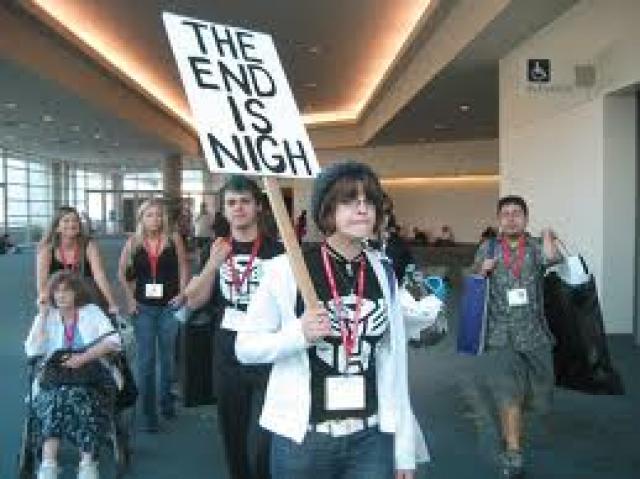 The weekend’s ‘End of Days’ spectacle should serve as a wake-up call that some behaviors characterized as ‘religious’ should not be protected.  Harold Camping and his followers are clearly mentally ill.  They should be treated as such, like any other delusional person, institutionalized and cared for, not humored in the name of religious freedom.

Though the First Amendment clearly protects all religious behaviors, “Congress shall make no law respecting an establishment of religion, or prohibiting the free exercise thereof..”, in reality, many religious practices are prohibited in the United States.  For example:  Human sacrifice, public sex acts, most animal sacrifice (except chickens), polygamy, polyandry, and rituals involving drugs.  “End of Days” cults should be added to this list of taboos.

‘End of Days’ cults are intrinsically destructive and negative.  It is heartbreaking to read of moms, dads, brother and sisters quitting their jobs and spending their savings to be “trumpets of the Rapture”.  Particularly sad were the revelations of the children involved.  They clearly knew that mom and dad had gone crazy, yet no one was helping them.  No child protective services intervening in the breakdown, no one putting them under the protection of the State, all under the guise of religious freedom.

‘End of Days’ and its Messianic bedfellows, the Second Coming and the Rapture, strike me as a form of suicidal behavior.  The individuals involved appear to have lost the will to live and just want everyday life to end.  But they are too selfish and vindictive to take their lives or get help, instead they convince themselves that they are special and will be rewarded, while everyone else around them, including their own children, will be punished and die.

The time has come for upstanding citizens to declare Revelations and Ezekiel as works of the clinically insane.  Doing so, would allow the medical profession to intervene if and when someone started acting out the ‘End of Days’.  It should no longer be acceptable for someone, even a grisly old Orthodox Rabbi, to talk about the Messiah riding through the Golden Gate in Jerusalem on a white donkey.  Such persons should receive immediate psychiatric intervention.  Any one speaking of Jesus’ Second Coming should be institutionalized, immediately, including the Pope.  When Mahmoud Ahmadinejad starts a speech at the United Nations invoking the Mahdi, he should be reminded that the Twelfth Imam is not a sound basis on which to found foreign policy.