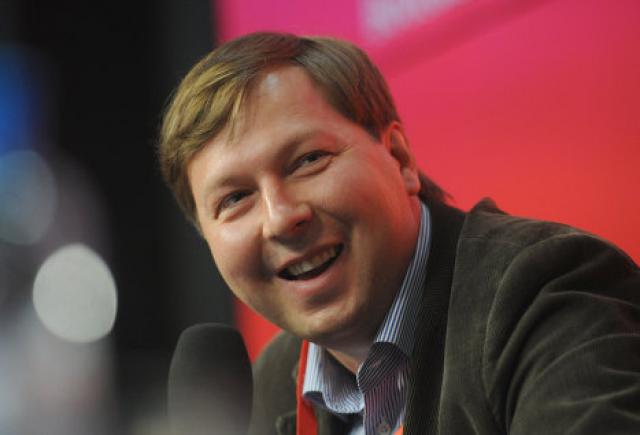 Dmitry Grishin, the 34-year-old co-founder and CEO of the Mail.ru, the largest Internet company in the Russian speaking world, finds a new path for development. His global investment company Grishin Robotics, founded in the summer of 2012 and headquartered in New York, USA is successfully implementing its goal of  blowing  $25 million on personal  robots.

In December 2012, the company announced its plan to invest $250.000 in RobotAppStore, the online app magazine for robots, founded in 2011 by Elad Inbar, an enthusiastic robotics researcher in California.  RobotAppStore offers applications for various robots, from the almost star-war looking humanoid androids NAO, to Roomba vacuum cleaners.
Prior to this square investment Grishin invested another $250K in Double Robotics, an American start-up that is working on the release of the iPad-based telepresence robot.
Despite a lot of skepticism that hovers over robotics start-ups Grishin seems optimistic about the new opportunities that investing in robots creates: comparing robot app stores to those of Google and Apple, he is confident that “The idea of a robot app store is a very unique proposal for the market. The more opportunities you create for using robots, the bigger the market will grow.”
The global market of personal robotics is indeed very lucrative. Around 30 million programmed robots have been sold up to date worldwide. According to ABI, it is estimated that by 2015 robotics market will hit$18 billion revenue. And according to experts from IFR, ABI Research and BBC Research, the market of personal robots will only grow.
The robotics market is roughly divided into two main areas – industrial and service robotics. Service robotics is further subdivided into professional and personal robots. The professional category includes medical and healthcare, transportation, logistics, and maintenance projects etc. The personal category includes, for example, robotics for home automation, personal assistance, education, and entertainment.
Mr. Grishin’s investment in robotics seems logical to those who are familiar with his background.  Dmitry Grishin graduated from the Faculty of Robotics and Complex Automation (Department of CAD Systems) at Moscow State Technical University and before joining Mail.ru Group in 2001 he worked as a software engineer. In 2010 Grishin became the CEO of the Mail.ru, which went public that same year.  Currently Mr. Grishin also serves as the head of the department of Information Technologies and Programming at St. Petersburg State University of Information Technologies, Mechanics and Optics. Besides, he is the founder of the Russian Code Cup – the largest competition for programmers in Eastern Europe.
* – This article originally appeared on Tilde Finance and has been republished with permission.
Filed under: Business
Share Tweet Pin G Plus Email
previous article: Guardians of Rescue Teams Up with Animal Aid USA to Help Save Soldiers’ and Civilians’ Dogs from S
next article: Mufti asks Indo, Pak political leadership to avoid provocative utterance