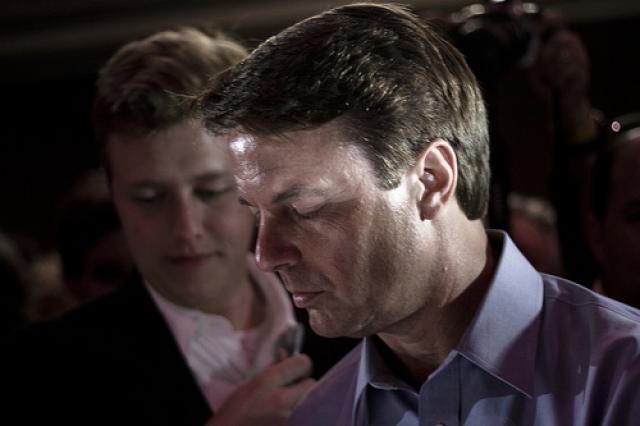 It would be one thing if John Edwards’ big boo-boo stood alone. But it isn’t working out that way.

Enough by now has been written about the bimbo eruption itself, the charismatic married Democrat and the “other woman,” the betrayed wife, the irate and brokenhearted supporters. Hmm… sounds familiar. Didn’t we just go through this a decade ago? It was enough to bigfoot a presidency back then. Now something similar can run over a guy who isn’t even in the running for nominee anymore.  That’s what happens when you act like a jerk. You make your bed and all that.

My teenage son, when he isn’t aiming to guitar-shred his way to Grammys and chart-toppers, thinks he might eventually want to run for office. He grew up knowing a family lesson about jerks. I used to tell him and his sister, frequently when they were little, that “if you act like a jerk, you’re gonna be treated like a jerk.” Now is as good a time as any for a reminder about that lesson. We presumably learned this lesson during the Bill-and-Monica escapade – ad nauseam. Only John Edwards evidently skipped school that day. It’s not just Edwards acting like a wanton, self-absorbed, cement-headed jerk. This story he did NOT have to tell if only he’d avoided temptation has brought out the jerks in everybody else around him. The story, unfortunately, has legs – long curvy ones, evidently.

Edwards undoubtedly decided to cough it up strategically in the name of damage control – on a Friday afternoon leading into a weekend – and not just any average wait-til-“Meet-the-Press” weekend, either. The story broke as people in Beijing were finding their seats in the Bird’s Nest to watch what turned out to be staggeringly stunning opening ceremonies. We were then treated to a weekend filled with better bodies than John Edwards could ever dream of finding in any backstage girl. It was a non-stop pageant of youth, vigor, strength, bulging biceps, tight backsides, sinewy arms, and colorful, form-fitting Spandex as far as the eye could see. The television media, always a sucker for great visuals, have a banquet table to feast upon day and night from now til the 29th Olympiad ends.

Well, they are, and they have, but sure enough, by Monday evening, much of the news coverage slobbered back at near-record pace to L’Affaire Edwards. For Pete’s sake, he’s not even the designated contender, for which even many Edwards supporters are now grateful. I guess all those beautiful Olympian physiques aren’t beguiling enough to distract us completely from a pert politician’s peccadilloes.  The media, too, has been acting like jerks.

Do we really have to get this drunk on this stuff? Do ALL of our media have to morph into the National Enquirer? ONE of those isn’t enough? If it were Obama or McCain as the star of the rogue revue, I might be able to understand. We love to see the big ones fall, and evidently Bill Clinton’s misadventure just wasn’t enough to satisfy. How long are we, as viewers, listeners, and readers, going to be dragged through these particular bedrooms? Does Andrea Mitchell REALLY want to stand there frowning somberly into the camera as though she were delivering the details of the next world war – except it’s about THIS? Do we all stampede to ABC’s “Nightline” for that salacious exclusive interview with the Great Unzipped? Do we have to sift through Rielle Hunter’s entire backstory as though she were some gold medal hopeful with a poignant history? We know Fox News will be neck-deep in it until McCain’s grandchildren have reached the age he is today. But it’s to be expected of them because they’re tawdry by definition, they enjoy fricasseeing ANY Democrat for ANY reason (and this is a doozy), and their owner’s calling card is lurid tabloid coverage all over the world.

Then again, few of these purveyors would get ratings if they didn’t chase this to the bitterest of bitter ends. Most of us seem to be willingly dragged back to the cave here. Many of us click the remote to the far ends of the cable lineup, searching for more lurid details, and then scour the internet for vile conspiratorial frayed edges.

I guess if Paris Hilton and Britney Spears find their way into a presidential campaign commercial, perhaps it’s become acceptable, or at least understandable, to become laminated to the illicit coupling of a spacey blonde with headbanded flyaway hair and a onetime hero who performed a splashy swan-dive off his Olympic-height political pedestal. Edwards is no longer a factor, he’s not expected to dare show his face at the convention, and his marathon run in politics has been disqualified – probably permanently. But we’ve all still got to obsess about it, don’t we?  As the New York Times’ Public Editor puts it: “Sometimes there’s News in the Gutter.”

No. Not exactly. Sometimes there’s TOO MUCH news in the gutter, or maybe just too much gutter, period. Enough. Especially now. It has nothing to do with Barack Obama once we do get through the Olympics and back into bigtime, nonstop presidential campaign politics. It has very little to do with John McCain, either, unless you’re stretching things for equal time purposes, as some have noted referencing the way his first marriage unraveled. Yes, there’s a gutter. I guess the main question is – what’s the length and width of that gutter? All the measuring and probing does at this stage of the game is injure. It hurts Elizabeth Edwards and her family. We know her husband’s a cad, we know he screwed up, and with whom. We know millions of his supporters who believed and trusted feel stabbed in the back. We know already. We get it. Have we wallowed enough yet? Or does the rest of the mainstream media feel as though it has to be a dog on a pants leg on this from here on, to make up for the months it avoided the story and left the National Enquirer to go for the gold alone? Edwards acted like a bigtime jerk. But do the rest of us have to, also?

For heaven’s sakes, if obscenity’s the game, the Bush/Cheney crimes against the Constitution and America’s reputation around the world, the way they’ve lied us into war and robbed us into bankruptcy should provide plenty of material. If it’s sex we simply must have, why not obsess on the Olympics? The swimmers and divers never wear very much, the runners and jumpers cavort in nearly-comparable states of undress, the skin-tight athletic wear on everybody else leaves little to the imagination about the world-class infrastructure underneath, and every competitor is in the springtime of his or her personal, physical best. If we must remain a nation of voyeurs, I’d rather see us all wallowing in a quadrennial sports orgy than clinging to the minutiae of a seedy affair with a political has-been.  Or in this tabloid age, perhaps that’s merely being a jerk.