Thursday late afternoon, Axel Plathe, the head of UNESCO office for Iraq, based in Amman, Jordan, said that he was shocked by what he saw. It instructed the director to identify the damaged parts of the museums of Iraq, which could take several hours or several days to repare. “If what we see is true, it is a direct attack on the Iraqi identity, that can compare to attack the Buddhas of Bamiyan, Afghanistan, by the Taliban,” said the specialist in the world Organization of the United Nations Educational, Scientific and Cultural Organization. It took the chair of the United Nations Security Council so that a meeting be held soon on the protection of “cultural heritage” of Iraq.
Plathe had this to say, “It is a shocking staging destruction, as they staged assassinations. That the works have really been destroyed or not, remains the strength of these images that shock us, manipulate us, and we refer to our impotence.”

It was a bull in a China shop. Complete chaos erupted during the filming of a ransack of a museum by ISIS members. Statues of Hellenistic were thrown to the ground and broken. The Islamic State issued Thursday, February 26th a new propaganda video showing, for the first time, the destruction of works of art. As if the destruction of lives wasn’t enough. According to the Islamic state, the video was shot in the museum of Mosul, the second largest in Iraq. Cartels sculptures, dating from the seventh century BC, are filmed in close-up. An unidentified man, which is expressed in classical Arabic, speaks to Muslims. “Muslims, these relics you see behind me are the idols that were worshiped instead of Allah there for centuries.” The five-minute film ends with the destruction in another archaeological site, which could be that of Nineveh, ancient capital of the Christian empire of Assyria. 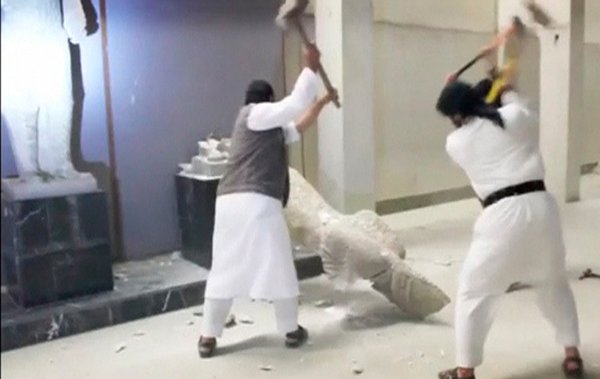 They show an obvious thirst for destruction. They rampage through cities and buildings now like they’re play things. “It’s a sad day for archaeologists,” responded Cheikhmous Ali, a PhD of archaeology of the ancient Near East at the University of Strasbourg and founder of the Association for the Protection of the Syrian Archaeology (APSA ). “These pieces are part of the memory of mankind. The thirst for destruction of the Islamists knows no bounds,” he murmured.

Samir saw Abdulac in tears. For the Secretary General of ICOMOS (International Council on Monuments and Sites, International Council on Monuments and Sites), a non-governmental organization working for the conservation of monuments and historic sites in the world, “it is a time to classify in the worst moments in the history of archeology.” It’s bad enough that lives don’t mean anything to ISIS, but the fact that information and knowledge that could easily have nothing to do with their regime, and by that I include having nothing to say against their regime either, shows offense and a need to be destroyed is little more than barbaric. “Islamists went after the horror showing the slaughter of a man, then two, then ten, broadcasting images of people caged, burned. They now have to change register to reach the minds and reacting to public opinion.”