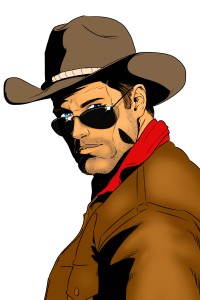 MTS Management Group and “Whiskey And Cigarettes” radio show are pleased to announce the unveiling of the show’s “Cowboy Casanova” brand mascot.  The comic book-inspired character will appear on the syndicated radio show’s  merchandise, promotional material, social media posts and more.  A weekly comic strip, featuring the character and the show’s special guest interviews, is also being planned for 2015.

The “Cowboy Casanova” character was inspired by a nick-name given to the “Whiskey and Cigarettes” award-winning host, Nik Pizzigoni: “Amongst the names that has definitely stuck like glue, is that of ‘Cowboy Casanova,” said Nik. “And thanks to the creative talent of Monkeyrocket and my immense love for comic books, at last what Carrie Underwood has sung about, has now taken shape. Ladies beware he is Jonah Hex with a dash of Tim McGraw and a hint of Clint Eastwood!”

Nik continued, “When I first saw Tim Burton‘s Batman on the big screen, that clinched my love for DC Comics…together with the old Flash tv show from the 90s, I have countless favourites but I would probably have to say Batman, Green Lantern and Flash are tops.  I see the “Cowboy Casanova” character as an homage to the DC comics world and their amazing covers that still keep me entertained to this day.”