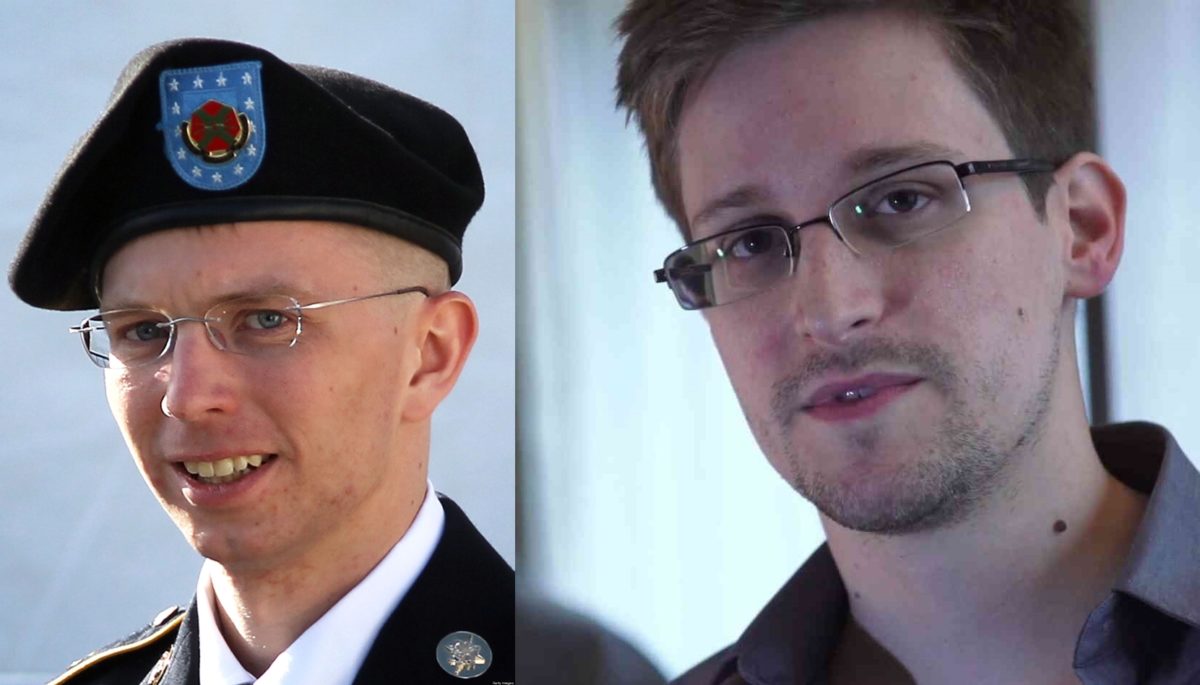 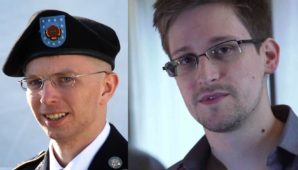 NSA whistleblower Ed Snowden and Army Whistleblower Pvt. Manning exposed abuses within the system. Without people like them we would never have known about serious abuse and corruption.

On June 12, 2014 Senator Wyden asked for permission to address the U.S. Senate regarding the Intelligence authorization bill. There he spoke of the contributions of whistleblowers.

A whistleblower (whistle-blower or whistle blower) is a person who exposes misconduct, alleged dishonest or illegal activity occurring in an organization.

The alleged misconduct may be classified in many ways; for example, a violation of a law, rule, regulation and/or a direct threat to public interest, such as fraud, health and safety violations, and corruption.

Whistleblowers may make their allegations internally (for example, to other people within the accused organization) or externally (to regulators, law enforcement agencies, to the media or to groups concerned with the issues).

Here is what Senator Wyden had to say:

“Last night the Senate passed the Intelligence authorization bill, and it contains some very important provisions relating to whistleblowers. While Senator Collins is on the floor, I wish to commend her for her extraordinary work on this issue. She has been at this for years, and it is a pleasure to be able to team up with her in this effort. I think it is fair to say both of us are very appreciative of the work done by our chair, Senator Feinstein, who did so much to make this possible.

I am going to be very brief. Chairman Harkin has some important remarks to make this morning. He graciously allowed me to go ahead of him.

I wish to reflect a little bit on where we are with respect to whistleblowers and the ability of intelligence agency employees to speak out on matters that do not affect national security but are important to the debate about how to ensure our country resolutely fights terror and protects the public’s right to know.

I think it is fair to say–and I make this judgment on the basis of having been on the intelligence committee for 13 years now–that the very important and worthwhile efforts to protect our national security after the terrorists murdered more than 3,000 of our people on 9/11 were also accompanied by a lot of overreaching by the intelligence leadership.

In recent years I think it is fair to say reformers have made some real progress in our efforts to address that overreach, and now with the PATRIOT Act and other measures coming before us–and the country truly understanding what is at stake–I think it is going to be possible to make additional progress.

The reason I have come to the floor to discuss whistleblowers and the ability of intelligence employees to speak out is a lot of the progress we have seen recently would not have happened without whistleblowers and without some of the intelligence agency employees who are willing to risk their very careers to draw attention to real and serious problems. I also make note of the fact that there were journalists, journalists who worked hard to report the facts responsibly to ensure an informed public debate that is so essential to our democracy.

Here is why the whistleblower issue is so important: There are existing laws and regulations that say employees of American intelligence agencies who are concerned about possible misconduct, such as waste and fraud and illegal activity, are allowed to report that, and these laws and regulations lay out channels for doing it.

The reality is these principles–and the idea is that if there is misconduct reported to one of these entities, the oversight entity would have some opportunity to do something about it. Unfortunately, reporting misconduct by your colleagues or by your agency does not always work out so well. That is why rocking the boat and reporting misconduct can sometimes be hazardous for an individual’s career.

If a government employee thinks about blowing the whistle on possible misconduct, but can see that their supervisor or someone in their chain of command is condoning or participating in that misconduct, the employee is rightly going to be concerned about possible retaliation and will not get that promotion and might not even be able to retain their security clearance.

So title VI of this year’s Intelligence Authorization Act strengthens the ability of those whistleblowers to come forward. It prohibits retaliation against intelligence whistleblowers who report misconduct using approved channels, and it includes disclosures to the Congress or to an inspector general. It requires the executive branch to establish an appeals process for whistleblowers who have their security clearance unjustifiably revoked. Establishing these protections in statute–in statute–in my view is an important advance forward. So we are making some progress there with respect to whistleblowers, but we are not doing so well with respect to making sure we are protecting the ability of our employees in the intelligence field to speak out.

Recently the head of National Intelligence issued a new policy directive regarding agency employees’ contact with the media. I will tell you, I am troubled by how sweeping in nature this is. At the outset, this is supposed to prevent disclosures of genuinely sensitive information. That is obviously an important goal, but it is also important to make sure that as we carry out that provision, we do not keep employees, for example, from being able to talk about nonclassified matters.

The new policy makes it clear that intelligence agency employees can be punished for having “contact with the media about intelligence-related information.” Make no mistake about it, that is so broad it could cover unclassified information. It does not lay out any limits on this extraordinarily broad term that I have described.

For example, is an employee’s opinion about the scope of the NSA’s domestic surveillance activities intelligence-related information? Are publicly available assessments about developments in Syria or the Ukraine intelligence related? This new directive does not say that, but it certainly points in that direction.

It becomes even more problematic if we read further down into this new policy and review the definition of the word “media.” It includes any person or entity “engaged in the collection, production or dissemination to the public of information in any form related to topics of national security, which includes print, broadcast, film and Internet.” This is extraordinarily broad. It goes well beyond professional news gatherers to include anyone who uses the Internet–the Internet–to disseminate any information at all relating to national security topics. So if someone is an employee of an intelligence agency and if they have a family member who likes to post or retweet articles about national security, suddenly having a conversation with that family member about important issues, such as NSA surveillance or the war in Afghanistan, could lead to them getting punished for having unauthorized contact with the media, which this directive says “will be handled in the same manner as a security violation” regardless of whether any classified information is disclosed.

So I am willing to give everyone the benefit of the doubt; that some of the authors of this policy did not intend to have this happen. I know that trying to make definitions of who is and is not a member of the media is going to be a challenge with these new media technologies, but that does not remove the fact that this policy is too broad, is too sweeping. It incorporates too much of what we want in Montana, in Oregon, which is to make sure our people can talk about the policy issues that afford them the information so they can cast a ballot.

My hope is we can get this corrected because I think it is going to have a chilling effect on intelligence professionals who simply want to talk about unclassified matters on important national security issues–such as how to reform domestic surveillance or whether our country should go to war.

In closing–and I thank my colleague from Iowa–we have made progress. Back in 2012 there was an overly broad antileaks bill reported by the intelligence committee. It came out of the committee on a 14-to-1 basis. I was the opposing vote. At that time I knew it was a flawed policy, but I did not even know how flawed it was because we were not able at the time to talk to outside parties. When it was ready for the floor, the country and journalists and citizens saw how sweeping it was, saw how flawed it was and the damage it would have done, again, to discussing nonclassified matters, and we got it corrected, but suffice it to say, we are going to have a host of challenges in the years ahead. While we have won victories–such as against that overly broad antileaks policy, when we were able to derail what would have been the biggest invasion of privacy in our country’s history, the Total Information Awareness Program, which was derailed because a young person in our office found a memo that demonstrated how sweeping it was–while we have made progress, we have a lot to do.

We are in better shape this morning because of the passage of that intelligence authorization bill and the additional measure of protections for whistleblowers, and Senator Collins and the chair of the committee, Senator Feinstein, deserve enormous credit. But make no mistake about it; we have a lot of work to do, and certainly that new media policy that has come from the Director of National Intelligence–that is so broad, so broad it could make it difficult to talk about unclassified matters on the Internet–is just one example of the kind of issue we are going to have to zero in on in the days ahead.

I also note that our next speaker, Chairman Harkin, has been a great advocate on these kinds of issues as well.

I thank him for his courtesy so I could go ahead.