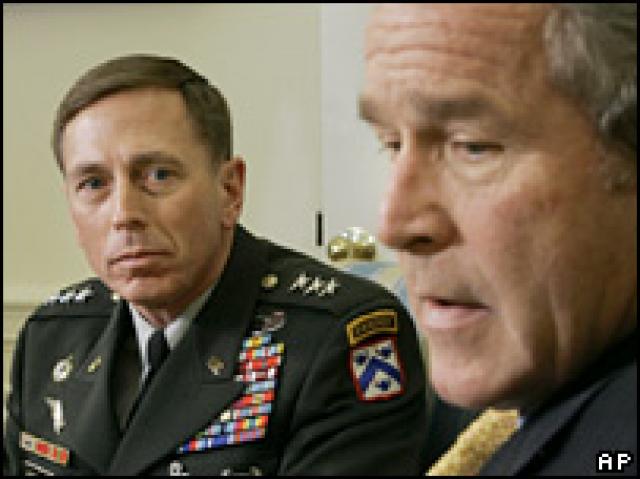 <div class="body">
<div style="padding-bottom: 15px;" class="imp">The top General in Iraq, General David H. Petraeus is scheduled to testify before congress next month on the progress that has been made in Iraq, directly tied to the surge President Bush claimed would turn the tide in Operation Iraqi Freedom.</div>
</div>
<p>Now according to congressional aides on Capital Hill, the Bush administration is taking action to block the General’s public testimony. According to Congressional staffers, the White House would like the General to report to Democratic, and Republican leadership behind closed doors, and then Secretary of State Condoleeza Rice, and Secretary of Defense Robert Gates would give public testimony to congressional committees. <br />
<br />
Senate Foreign Relations Committee Chairman, and Democratic Presidential hopeful Joe Biden, and Senate Armed Services Committee Chairman Carl M. Levin have both said that private testimony by Petraeus would be unacceptable. <br />
<br />
One has to wonder exactly what the Bush administration wants to hide <strong>this time</strong>. It’s almost universally accepted that Petraeus could not honestly report that things in Iraq are going as well as the Bush administration would like, but is this a sign that it’s going <strong>worse</strong> than even those who have admitted it’s a failed plan have thought? <br />
<br />
President Bush has repeatedly referred to the general as the one who will be delivering the report in September and has implored the public and Republicans in Congress to withhold judgment until then. In an interim assessment last month, the White House said that significant progress has been shown in fewer than half of the 18 political and security benchmarks outlined in the legislation that requires General Petraeus to testify about progress, or lack there of being made</p>