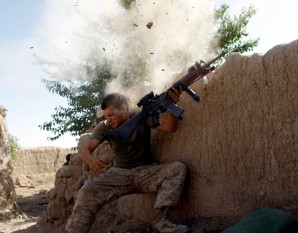 ON THE DEFENSIVE US TROOPS: Taliban fighters almost blow the head of this young Marine in Afghanistan.

On February 5, 2015 Rep. David McKinley of West Virginia asked and was given permission to address the House for 1 minute regarding the Taliban terrorist group:

“Mr. Speaker, on January 28, the White House refused to recognize the Taliban as a terrorist group, calling them an “armed insurgency” instead. What part of terrorism don’t they understand?

Under Federal law, a “terrorist organization” must meet three criteria: be foreign, be engaged in terrorist activity and intimidation, and threaten the security of the United States of America.

The Department of the Treasury and the National Counterterrorism Center define the Taliban as a “terrorist organization,” but the White House refuses to do so. Common sense says, if we can’t call our enemy what they are, then how can we fight them?

Mr. Speaker, my resolution is simple. It urges the administration to publicly recognize the Taliban as a terrorist organization. We could use a little straight talk around here.

I ask for your support of House Concurrent Resolution 13.”