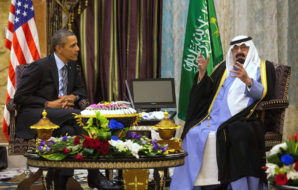 President Obama met with King Abdullah of Saudi Arabia bearing gifts of military assistance and weaponry to the brutal and ruthless monarchy. Saudi Arabia is the chief sponsor, promoter and financier of Islamic extremism and terrorism around the world.

On March 28, 2014 during a press conference with reporters on board Air Force One with the president in route to Saudi Arabia Press Secretary Jay Carney confirmed US military assistance to Saudi Arabia.

“MR. CARNEY:  Welcome aboard Air Force One, en route Riyadh from Rome.  I have with me Benjamin Rhodes, Deputy National Security Adviser, and he will gladly answer your questions on a variety of topics, as will I.  No announcements.  What have you got?

Q    I have a couple on the Saudi visit.  Is the President planning to tell the Saudis anything specific about any new assistance for Syria — rebel training, anything similar to that?  And can you just also talk about what his general message is going to be on the Iran talks?

MR. RHODES:  Sure.  Well, first of all, generally on the Saudi visit, I think it’s an opportunity to reaffirm the importance of the relationship, to talk about Gulf security, Syria, Iran, Middle East peace, and other regional developments — in Egypt, for instance.

On Syria, there’s not a specific announcement forthcoming around additional assistance.  The fact of the matter is, though, we have been working in close cooperation with the Saudis and other countries in the region to coordinate our assistance for the Syrian opposition over the course of the last several months.  And I think we believe we’ve made good progress in enhancing that coordination, making sure that we are working in concert in terms of who we are providing assistance to and what types of assistance we’re providing.  And, frankly, that’s part of the reason why I think our relationship with the Saudis is in a stronger place today than it was in the fall when we had some tactical differences about our Syria policy.  So I think that the coordination has improved in terms of the provision of assistance — that’s in part because we’ve worked closely with the Saudis, we made a concerted effort to have very extensive discussions with them in security channels, in political channels.  But that will definitely be one of the main topics of conversation is how do we best empower the moderate opposition inside of Syria politically, militarily as a counterweight to Assad — and also, frankly, as a means of isolating the extremist groups within Syria…

Q    Ben, as a follow-up to that, the Saudis would like more weapons to go to the opposition in Syria — the New York Times wrote a story about that today.  Is that something that the U.S. is willing to loosen a little bit in terms of its support for?  And also what message will the President have regarding Egypt?  Will he be pressing Saudi to have more influence over what’s going on in Egypt and the government there?

MR. RHODES:  Well, we don’t get into specific types of military assistance, but I think obviously the Saudis have been pressing for some time for there to be as much support as we could provide to the opposition.  And we have been willing to look at ways of increasing the ability for the United States and other countries to provide support to the opposition.  Part of that is not just the amount of assistance but also how is it coordinated.  So when you take the United States, Saudi Arabia, other Gulf countries, Turkey, European partners — making sure that the types of assistance we’re providing are complementary so that you get a better impact for the assistance that you are providing and also that you have the ability to flow assistance into the country effectively, which, as time goes on, we get better at.  So that will be a topic of conversation, but I think what you’d find is that we are in a better place today certainly than we were several months ago because we’ve improved our coordination with the Saudis and other countries” (source: White House Press office http://www.whitehouse.gov/the-press-office/2014/03/28/press-gaggle-press-secretary-jay-carney-and-deputy-national-security-adv).

See article: Despite an abysmal human rights record and concerns over the funding of terrorism worldwide the US military affirms support of Saudi Arabiahttps://groundreport.com/despite-an-abysmal-human-rights-record-and-concerns-over-the-funding-of-terrorism-worldwide-the-us-military-affirms-support-of-saudi-arabia/

See article: In Saudi Arabia you can be whipped for saying “Jesus Christ is Lord”https://groundreport.com/in-saudi-arabia-you-can-be-whipped-for-saying-jesus-christ-is-lord/