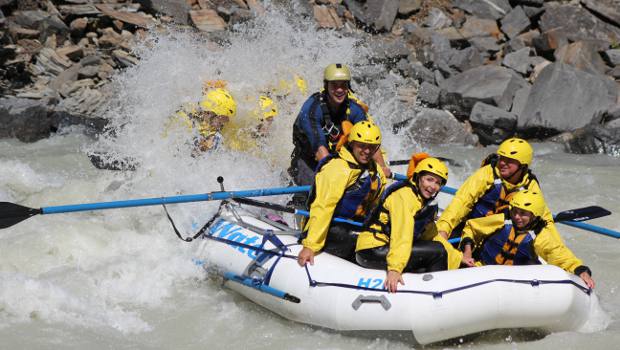 Banff, Alberta, Canada – Still looking for the best white water rafting Banff has to offer? Well, you are in luck, as rafting will continue as usual this summer after a last minute agreement was reached on Friday, April 22nd between six local commercial whitewater rafting outfitters and Canadian Pacific (CP) Railway Company to maintain access to an important section of the Kicking Horse River.

Banff rafting company owner, Ted Bilton of Wild Water Adventures, based in Lake Louise, Alberta, has been using that stretch of river for his guests for over 20 years. Bilton said, “We were confident that CP would support us by continuing to allow access to that section of the river while maintaining safety standards for all concerned, but they had us worried for a while. CP ultimately stepped up to the plate and we’re thrilled that we, meaning all six rafting companies and all recreational users, will continue to access to this spectacularly beautiful and thrilling section of class IV and IV+ rapids and white water.”

The conflict arose as a result of Transport Canada, who regulates safety issues for the railway company, raising concerns over the safety of commercial rafting companies having to cross over an uncontrolled portion of the railway tracks with guests, staff and equipment in order to access the river and the put-in location for a particularly exciting section of the famous Kicking Horse River, near Golden, British Columbia. While this practice had previously been going on for over three decades without incident or concern with the consent and co-operation of both CP Railway and the rafting companies, Transport Canada asked CP Railway for improved monitoring and safety provisions. The initial reaction by the railway company in March was to simply shut down all access for all users.

“Their initial response of simply closing all access for all users was certainly not the resolution that we were anticipating. That got us really worried and concerned for our livelihoods and for job security for our employees who rely on the success of our businesses for a large chunk of their annual incomes”, stated Bilton.

But a closure of access was simply not a solution that the outfitters or the community wanted to accept. Local, provincial and even national government rallied together after realizing the impact the closure may have on not only the six local rafting companies, but also those businesses that benefit from the spinoff spending and tourism dollars that the rafters bring to the mountain town of 4,000 residents.

“The loss of revenue for our small town would have been between 3 and 5 million dollars”, said Andy Brown of Tourism Golden.

On Friday, CP Rail said that new safety procedures and protocols would be established for the crossing allowing access to the river to remain open.

So, for Wild Water Adventures, efforts and energies can now be re-directed to readying their operations in time for the Victoria Day Long Weekend opening on May 21st, the traditional kick-off to summer for Canadians.

“We have access to a fabulous river…one of the best in the world, really, in that it offers so many different adventure levels and rafters of all ages can enjoy the river rafting experience. We’re so excited to continue to have all sections of the river available to offer the visitors to this area. It would have been a shame had that not continued.”