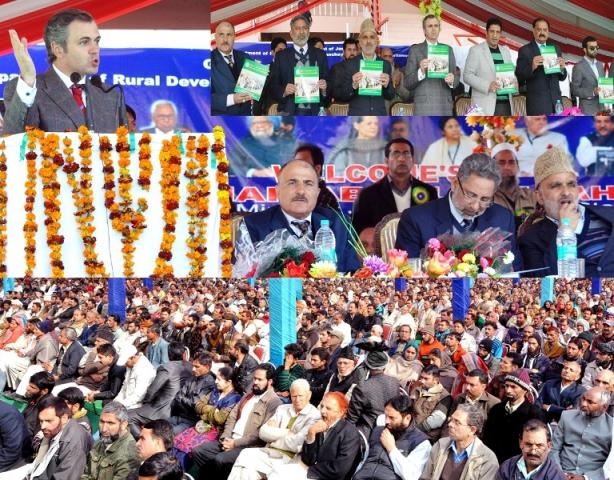 Jammu, January 11 (Scoop News) – Taking a dig on opposition (PDP) for shutting eyes to the revolutionary initiatives and considerable achievements registered by the coalition during last three years, the Chief Minister Omar Abdulla said that those who are raising hoarse cry on availability of power could not even help generate a single MW during their tenure. “Those who have covered their eyes with black glasses only see dark”, he added.

Omar was addressing a mammoth gathering of Sarpanches and Panches at Parade Ground here today. The function was organized by Rural Development and Law, Justice and Parliamentary Affairs Departments.

Describing Pubic Service Guarantee Act (PSGA) one of the biggest initiatives of his Government for public empowerment and good-governance, Chief Minister, Omar Abdullah Wednesday said that the State of Jammu and Kashmir is among the vanguard States in the Country to have such a powerful and effective Act in place to ensure prompt service delivery.

“Anna Hazare sat on hunger strike for similar legislation”, he said highlighting the importance of this piece of legislation to curbing corruption at lower levels and making service delivery time bound.

“We are examining two proposals of creating a separate department for implementation of PSGA under the overall control of the Chief Minister or a Commission like that of State Right to Information Commission to be headed by an independent authority to enforce the provisions of PSGA in the State”, he said indicating the thrust government wants to lay on the strict implementation of the Act across the State.

The Chief Minister said that panchayats would be integrated with the planning process at Halqa level during the next financial year adding that this mechanism could not be rolled out in the current financial year as the elections to these institutions were completed in mid year.

Indicating allowances for sarpanches and panches, the Chief Minister said that a proposal in this regard has been prepared by the Rural Development Department and is presently under examination in the Finance Department. “We intend to accommodate your demand in this regard to some extent”, he told the grand panchayat meeting of sarpanches and panches asking them to devote their full attention to work for public good.

Underlining the role of panchayats in disseminating the provisions of Public Service Guarantee Act (PSGA), Omar Abdullah said that these basic democratic institutions will play key role in helping the people to get public service delivery in fixed time frame as envisaged in the Act. The panchayat members can create greater public awareness about the Act educating the people as to how they could take best advantage of it for obtaining public services from the administration in a fixed time limit.

Omar Abdullah said that the Act has turned the table so far as bribes are obtained by unscrupulous government employees for providing public services like issuance of building permission, driving licenses, state subject certificates, ration card, electric and water connections, etc to common people. “Now the Act has empowered the people to receive compensation from the erring officials for failing or showing any laxity or delay in providing these services within the specified time frame”, he said asking the people to utilize the provisions of this Act to their best use.

“I have been told that the first fine under the Act has been imposed on a Tehsildar from Reasi for not providing Reserve Category Certificate to the applicant in fixed time limit. A portion of it will be paid as compensation to the affected applicant”, he said adding that the Act would be an effective tool in the hands of people to transform the service delivery system of the administration.

The Chief Minister said he has directed bringing some services of Home Department under the ambit of the Act which includes issuance of copy of FIR and character certificates. The issuance of MGNREGA card has also been asked to be made time bound under the PSGA.

Omar Abdullah gave full credit to people for extending their full support to him in steering the State out of various troubles and said that the credit goes to people for creating 2011 as a year of peace and economic betterment.

“Despite many attempts made to disturb law and order and peace in the Valley and other parts of the State by certain elements utilizing different untoward incidents, the people understood the designs of these elements and rejected them totally”, he added and asked the hand of common masses for leading the State towards the shore of peace, prosperity and progress.

The Chief Minister said that the peaceful 2011 helped in registering large number of tourists in the State. “About 13 lakh tourists visited the Valley, 6.37 yatris visited Shri Amarnath Ji and over one crore pilgrims visited Mata Vaishno Devi” he said adding that this helped in generation of wide-ranging economic activities. He expressed the hope that 2012 would also be the year of peace and development in the State.

Omar Abdullah lauded the efforts of PDD, R&B, PHE, CAPD, BECON, National Power Grid Corporation and other agencies and individuals who worked tirelessly in the biting cold to restore the public services that were severely damaged by the recent heavy snowfall in the Valley and Jammu areas. “I was overseeing the operation and showing my solidarity with them”, he said adding that they actually worked in most difficult conditions and restored the services.

Speaking on the occasion, Minister for Rural Development, Law and Justice, Ali Mohammad Sagar said that those (PDP leadership) who make false propaganda against the coalition government are in fact very much frustrated by witnessing the success of Omar-led dispensation in all fields of life.

“These people are jealous of the significant work culture put in place by the coalition and historic achievements registered to ameliorate the lot of masses”, he added and said that during their (PDP) tenure they could not even transfer one service to panchayats and urban local bodies and made these non-entity units.

“There should be some limit for making false propaganda, but opposition is devoid of all such traits and are upset to see the leadership qualities of Omar Abdullah who rowed the boat clear of difficult water currents to the shore of peace, stability and progress”, he said. He said coalition government would continue to work with added efforts to bring about socio-economic change and peace in Jammu and Kashmir making it prosperous, tranquil and progressive State as dreamt by Sher-i-Kashmir Sheikh Mohammad Abdullah.

Presenting resume of the achievements registered in Rural Development and other sectors during the last three years, Ali Mohammad Sagar said that the funds earmarked for MGNREGA in 2008-09 when the present government took over were just Rs. 69 crores which have been raised to Rs. 750 crores this year and next year’s allocations would be Rs. 1500 crores. He said wide-ranging development works in huge numbers in the form of construction of roads, culverts, small bridges, check dams and protection bunds have been completed across the State besides raising plantations and conducting land development works.

Sagar said that the State Government has sent a proposed to the Government of India for enhancing the daily rate of MGNREGA workers from Rs. 100 to Rs. 125. “We want to raise it to Rs. 200 in near future”, he added and said that snow clearance operation is also being brought under ambit of MGNREGA to provide additional mandays of work to the labourers in winter months.

Sagar expressed gratitude to the UPA leadership for extending full support to Omar-led coalition for meeting all challenges and carrying forward development process with a purpose and determination. He said that coalition government is working in tandem to bring about socio-economic change in the State and restore peace. “We would work with same determination and commitment during next three years under the leadership of Omar Abdullah to achieve the targets on all fronts”, he added.

The Law Minister also referred to the measures government has initiated for the welfare of Bench and Bar and talked about in detail about the enactment of historic Public Service Guarantee Act in the State.

In his speech Minister of State for Rural Development, Ajaz Ahmad Khan said that the people are real judges to judge the performance of a government. He said the work card of coalition dispensation under the leadership of Omar Abdullah is the mirror of its public friendly and development oriented approach.