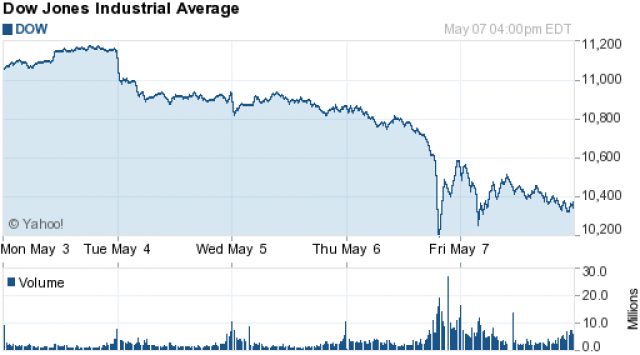 Rumors are swirling in the suburbs of New York, where the Wall Street traders and investment bankers live, that the stock market was hacked on Thursday.  A story is circulating that the government is covering up what happened because the perpetrators got away and they don’t want to create more public unrest after the attempted terrorist bombing in Times Square last Sunday.

The whisper is that Greek computer hackers upset with the austerity program being forced on their country by the European Union attacked the financial system to express their rage.  Apparently, they can’t be traced because they infiltrated the high-speed trading systems of a few major banks so there is no money trail.  It all leads back to the Wall Street firms.

The link between the market crash and the whipping given to Accenture’s stock is particularly suspicious in that Accenture has been consulting on the trading security infrastructure for years.    Were the hackers signaling to the authorities that they knew exactly who designed the systems and how the firewalls worked?

Targeting Proctor & Gamble and 3M also made sense because they are the largest dollar value components of the Dow Jones Industrial Average and could have the biggest momentary impact on the index.  Remember the attack lasted less than seven minutes.

The spike in the value of the stock of Boston Beer, the maker of Samuel Adams, appears to have been a prank to add a bit of humor to the entire episode.