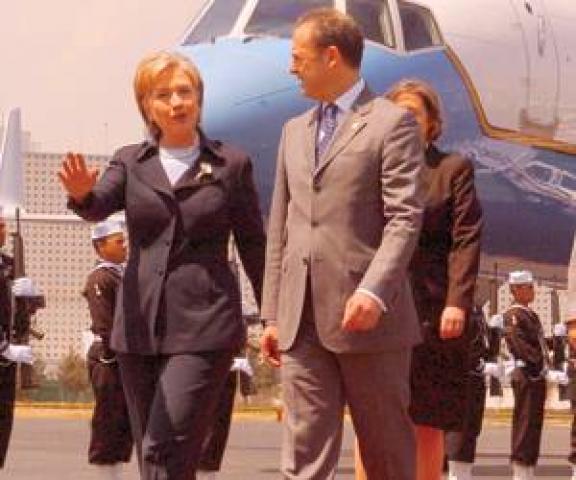 US Secretary of State, Hilary Clinton, on a political tour of sorts in Mexico, was very clear when she stated during a press conference that there are no areas in Mexico that are ungovernable. The problem is that there are certain areas facing difficult situations because of the violence.

Another declaration of Clinton’s was that Mexico should not be held fully responsible for the violence and trafficking of drugs, rather, the US is also responsible for the increase in demand of drugs which fuels the supply from the cartels. With this being said it is reported that President Obama will be supporting Mexico financially in order to tackle the crisis with the cartels and the problem with crime in Mexico.

The promising pledges from the US to Mexico will be $80 million dollars worth of Black Hawk helicopters for the Mexican Security Agency. The Black Hawks will be used to monitor and prevent more drug trafficking with the aim of eliminating the problem, if possible.

Another promising pledge from the US to Mexico was an additional $700 million dollars to the Merida Initiative, a treaty of sorts between the US, Mexico & Central America with their aim on fighting drug trafficking, transnational crimes, and other major issues which tie all three nations.

Clinton mentioned during the press conference that there will be the "creation of a new bilateral implementation office… in Mexico." This office will serve to join both Mexican and American officials to help one another in the fight against drug trafficking.

So far there is too much "fighting against drug trafficking" being stated. This was one priority of Mexican President Felipe Calderon when he first took office. He has been true to his word but the results seem sketchy. Violence is increasing because of the operatives being undertaken by Mexican Security Officials. A few members of certain cartels have been hooked and reeled, but, there are still more to apprehend.

I feel that the war on the cartels is absorbing so much time from other issues that need to be tackled such as Mexico’s horrific economy and corruption. Although Mexico does not live in the times of the PRI, the infamous political party known for their corrupt lifestyle, this does not necessarily mean that the problem is controlled. It’s not.

In the end I will be honest when I say that President Calderon is still in control of Mexico, even though it’s been reported that he himself has been in a few political scandals. PEMEX!