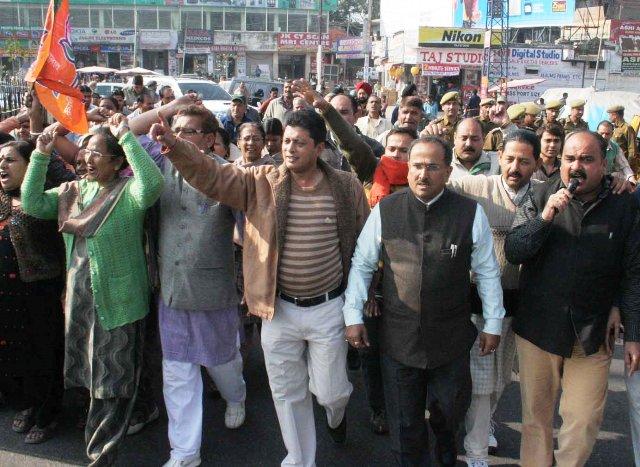 , December 7 (Scoop News) – BJP National Executive Member & former State President Dr. Nirmal Singh said that the accession of J&K with is a settled fact and those who talks of it being a dispute are virtually playing the game of separatists. Their obvious purpose is to fish out in the troubled waters and to get something to achieve their semi-seccessionist agenda.

Dr. Nirmal Singh was addressing party activists at Satwari Chowk after leading protest demonstration and burning the effigy of Omar Abdullah against his utterances at Satwari Chowk on Tuesday. By challenging the finality of the accession of with Indian union, the State Chief Minister is crossing the constitutional limits which needed to be met with stiff opposition,Nirmal Singh said.

Reminding the State Chief Minister that the Constitution under whose oath he has assumed the chair of State Chief Minister is very clear that “Jammu and Kashmir is, and shall remain an integral part of India”, Dr. Singh said that even  Omar’s father Dr. Farooq Abdullah has  accepted publicly a number of times that “Jammu and Kashmir is an integral part of India”. By raising question on the accession, Chief Minister has indulged in anti-constitutional act and he should seek apology or vacate the chair.

Dr. Singh said that the role of Congress viz-a-viz since 1947 has been very disgusting. The Congress leaders, instead of working for complete integration of the state, always pursued appeasement policies. It was in this context that Article 370 was incorporated in the Indian Constitution, which has induced a sense of separatism and there have been demands like Azadi, autonomy, pre-1953 position and merger with . The time has come when the Congress should realize its obligation towards the nation and clear its stand on what the CM has uttered. Congress should stop compromising on the issues of national cause in the state for the sake of remaining in power and work towards complete integration of the state with the Union of India by supporting the BJP’s demand of abrogation of Article-370, he said.

Distt. President Rajesh Gupta, on the occasion, said that the party activists at mandals level have been holding protests and burning the effigies to register their resentment against the anti-constitutional utterances of the State Chief Minister. During the past few days, such protests were held by Janipur, Talab Tillo, Jammu East and Gandhi Nagar mandals, which witnessed massive participation of the masses besides party activists, which is a clear message to the CM that nationalist people wont tolerate any anti-national statements remarks or utterances.